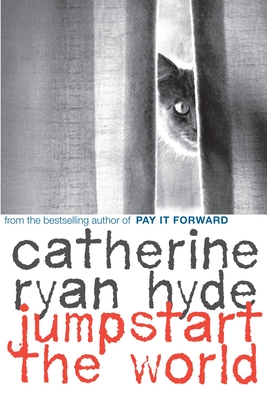 Elle is a loner. She doesn't need people. Which is a good thing, because now she has to move out of her apartment so her mother's boyfriend won't have to deal with her.

Then she meets Frank, the guy who lives next door to her new place. Being with him is impossible: he's a grown-up and has a girlfriend.  Still, Elle can't stop thinking about him.  Frank isn't like anyone Elle has ever met. He listens to her. He's gentle. And Elle is falling for him, hard.

Then Elle discovers that Frank is different in a way that Elle was never prepared for: he's transgender. Elle's head and her heart explode; her world is turned upside down.  But when an accident nearly takes Frank's life, Elle must search inside herself to find not only the true meaning of friendship but her own role in jumpstarting the world.

Tender, honest, and compassionate, Jumpstart the World is a stunning story to make you laugh, cry, and honor the power of love.

CATHERINE RYAN HYDE is the author of four other young adult novels: Becoming Chloe, The Year of My Miraculous Reappearance, The Day I Killed James, and Diary of a Witness. She is also the author of several adult novels, including the national bestseller Pay It Forward, Love in the Present Tense, Electric God, and Chasing Windmills. Catherine Ryan Hyde is also an award-winning short story writer and a professional speaker. She lives in California and writes full-time.
Loading...
or
Not Currently Available for Direct Purchase