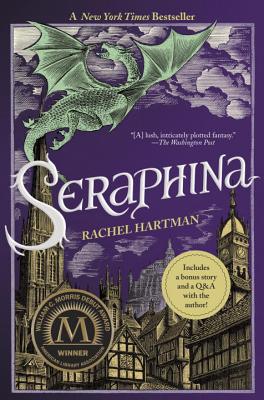 Lyrical, imaginative, and wholly original, this New York Times bestseller with 8 starred reviews is not to be missed. Rachel Hartman's award-winning debut will have you looking at dragons as you've never imagined them before...

In the kingdom of Goredd, dragons and humans live and work side by side - while below the surface, tensions and hostility simmer.
The newest member of the royal court, a uniquely gifted musician named Seraphina, holds a deep secret of her own. One that she guards with all of her being.
When a member of the royal family is brutally murdered, Seraphina is drawn into the investigation alongside the dangerously perceptive--and dashing--Prince Lucien. But as the two uncover a sinister plot to destroy the wavering peace of the kingdom, Seraphina's struggle to protect her secret becomes increasingly difficult... while its discovery could mean her very life.

"Will appeal to both fans of Christopher Paolini's Eragon series and Robin McKinley's The Hero and the Crown." --Entertainment Weekly
" A] lush, intricately plotted fantasy." --The Washington Post
"Beautifully written. Some of the most interesting dragons I've read."
--Christopher Paolini, New York Times bestselling author of Eragon.

As a child, RACHEL HARTMAN played cello, lip-synched Mozart operas with her sisters, and fostered the deep love of music that inspired much of her award-winning debut novel, Seraphina. Born in Kentucky, Rachel has lived in Philadelphia, Chicago, St. Louis, England, and Japan. She now lives with her family in Vancouver, Canada. A New York Times bestseller, Seraphina won the William C. Morris Award, received eight starred reviews and was named to multiple "best of" lists. To learn more, please visit SeraphinaBooks.com or RachelHartmanbooks.com.