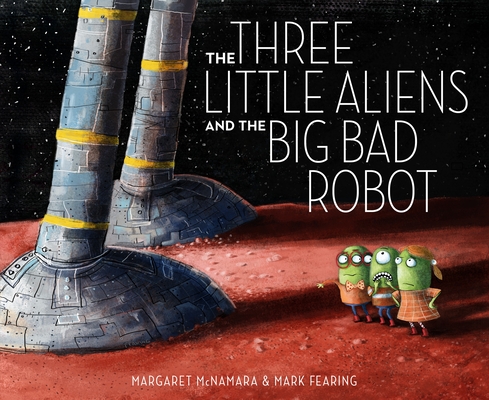 The Three Little Aliens and the Big Bad Robot

Introduce kids to the planets and solar system in this fractured fairy tale retelling of the classic The Three Little Pigs. Parents and children alike will adore this out-of-this-world story, which is set in outer space!

GREEP BOINK MEEP! The three little aliens are happily settling into their new homes when the Big Bad Robot flies in to crack and smack and whack their houses down! A chase across the solar system follows in this humorous and visually stunning book from Margaret McNamara (How Many Seeds in a Pumpkin?) and Mark Fearing (The Book that Eats People). The endpapers even include a labeled diagram of all the planets.

MARGARET MCNAMARA is the author of How Many Seeds in a Pumpkin?, called "illuminating" by Family Fun magazine and recommended as "a first-purchase consideration" by School Library Journal. She is also the author of the popular Robin Hill School early reader series, one of which, The Pumpkin Patch, was awarded the Oppenheim Toy Portfolio Best Book Award-Gold. She lives in New York City.

MARK FEARING has created award-winning editorial cartoons, animated shorts that have appeared on Nickelodeon and G4, and was a production manager for Walt Disney Television Animation. He is also the illustrator of The Book that Eats People by John Perry, called "irresistible" by Publishers Weekly and a "hilariously dark story" by School Library Journal. He lives outside Portland, Oregon. Visit him at MarkFearing.com.
Loading...
or support indie stores by buying on