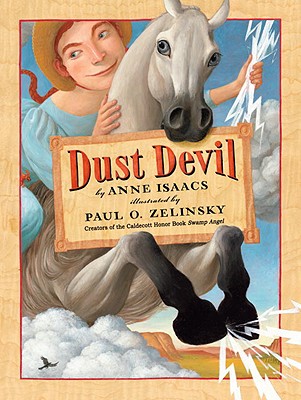 Here is the thrilling, thigh-slapping companion to "Swamp Angel, " the beloved Caldecott Honor winning picture book.
Swamp Angel has a reputation as the greatest woodswoman and wildest wildcat in all of Tennessee. But when she grows too big for that state, she moves to Montana, a place so sizeable, even Angel can fit in. It's there that she wrestles a raging storm to the ground and, at its center, finds herself a sidekick a horse she names Dust Devil. And when Backward Bart, the orneriest, ugliest outlaw ever known, starts terrorizing the prairie, seems like Angel and Dust Devil may be the only ones strong enough to stop him.
"Dust Devil" received four starred reviews and was named a "New York Times" Notable Children's Book of the Year and an Oppenheim Toy Portfolio Platinum Winner. Children will be captivated by the beauty and exaggerated humor of Paul Zelinsky's American primitive style paintings and the wit and energy of Anne Isaacs's unparalleled storytelling. Here is an original folktale starring an extraordinary gal who is as feisty as she is funny and as courageous as she is kind.

“This gifted team has produced the best picture book of the year!” —Oppenheim Toy Portfolio

Anne Isaacs is the award-winning author of many books for children, including "Swamp Angel, " a Caldecott Honor Book, an ALA-ALSC Notable Book, and a "Boston Globe-Horn Book" Honor Book; "Cat Up a Tree, " a New York Public Library Title for Reading and Sharing; "Torn Thread, " an ALA-ALSC Notable Book and a National Jewish Book Award finalist; and "Pancakes for Supper, " winner of the Oppenheim Toy Portfolio Platinum Best Book Award. Ms. Isaacs lives in Berkeley, California. Visit her at www.anneisaacs.com.

Paul O. Zelinsky is one of the most highly acclaimed illustrators working today. He has received a Caldecott Medal for his telling of "Rapunzel, " and three Caldecott Honors, for "Rumpelstiltskin, Hansel and Gretel, " and "Swamp Angel, " which the "New York Times Book Review" called in all ways superb. The illustrator of Emily Jenkins s popular "Toys Go Out" and its sequel, "Toy Dance Party, " Mr. Zelinsky is also the creator of the bestselling mechanical book "The Wheels on the Bus." He lives in Brooklyn, New York. Learn more about him at www.paulozelinsky.com."
Loading...
or support indie stores by buying on
(This book is on backorder)