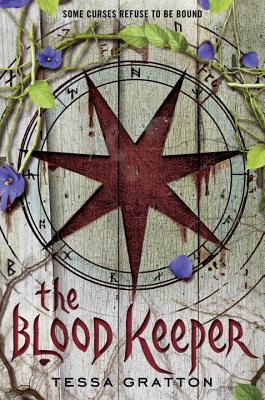 Paranormal romance fans who are looking to up the ante will be drawn to this tale of horror, fantasy, and romance.

For Mab Prowd, the practice of blood magic is as natural as breathing. It's all she's ever known. Growing up on an isolated farm in Kansas with other practitioners may have kept her from making friends her own age, but it has also given her a sense of purpose—she's connected to the land and protective of the magic. And she is able to practice it proudly and happily out in the open with only the crows as her companions. Mab will do anything to keep the ancient practice alive and guard its secrets. But one morning while she is working out a particularly tricky spell she encounters Will, a local boy who is trying to exorcise some mundane personal demons. He experiences Mab's magic in a way his mind cannot comprehend and is all too happy to end their chance meeting. But secrets that were kept from Mab by the earlier generations of blood magicians have come home to roost. And she and Will are drawn back together, time again by this dangerous force looking to break free from the earth and reclaim its own dark power.

"The power of this narrative lies in the gorgeous prose, lush with a gothic sensibility, ripe with sensual images of horrific beauty. . . . Passion, heartbreak, yearning and dread bleed from every page. A perfect book for those who loved Wuthering Heights and are looking for an essentially American gothic."--Kirkus Reviews

TESSA GRATTON has wanted to be a paleontologist or a wizard since she was seven. She was too impatient to hunt dinosaurs, but is still searching for someone to teach her magic. After traveling the world with her military family, she acquired a BA (and the important parts of an MA) in Gender Studies, and then settled down in Kansas with her partner, her cats, and her mutant dog.

Praise For The Blood Keeper…

KIRKUS REVIEWS
Blood and roses, love and death, past and present, the mundane and the magical; all intertwine in this dark fantasy, a stand-alone companion to the well-received Blood Magic (2011). Will Sanger, high school soccer star, only wanted to free himself from his recurrent nightmares. Mab Prowd, neophyte guardian of the blood magic, only wanted to understand the curse buried beneath her rose garden. But when their choices bind their fates together, an old love story and a long-concealed crime begin to creep into the present. As Will is forced to confront his family's recent tragedy and the demands of their expectations, Mab is called upon to devise rituals and seize powers well beyond her training. Their alternating perspectives interweave to form a nightmare of steadily building desire, obsession, sacrifice and violence. The power of this narrative lies in the gorgeous prose, lush with a gothic sensibility, ripe with sensual images of horrific beauty. . . . It's all about feeling: Passion, heartbreak, yearning and dread bleed from every page. A perfect book for those who loved Wuthering Heights and are looking for an essentially American gothic.

VOYA
Mab Prowd's blood magic is an essential part of her. Her new leadership role as deacon, however, is proving difficult to grow into. She is now responsible for the magical upkeep of acres of land and for the well-being of her extensive magical family, all while still grieving the loss of her beloved mentor, the former deacon. Will Sanger, a typical high school student, has suffered recent traumas that have made him question his previously well-ordered existence. When Will and Mab meet, they are unexpectedly bound together by the evil of an old curse and must fight for both their freedom and to find their places in the world. This is a companion novel to the excellent Blood Magic (Random House, 2011/VOYA June 2011). Mab and Will are new, but characters from the first volume of the series do play a part in this story. Mab and Will narrate in alternating chapters, each speaking with a believable, interesting voice. This is a paranormal story, full of magic and curses, but it is also a coming-of-age tale. The writing is lyrical and dark, deftly evoking both tragedy and beauty. The characters are well drawn and sympathetic. The plot is nicely paced, moving along with a perfect balance of suspense, excitement, and introspection. Will and Mab grow a great deal on their journey together, as they explore the nature of responsibility and sacrifice. This book will be eagerly anticipated by fans of the first novel and is a must for any collection that serves readers of paranormal fiction.