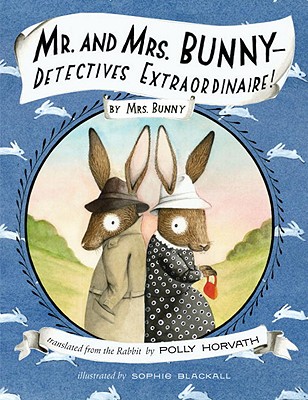 In this hilarious chapter book mystery, meet a girl whose parents have been kidnapped by disreputable foxes, and a pair of detectives that also happen to be bunnies! When Madeline gets home from school one afternoon to discover that her parents have gone missing, she sets off to find them. So begins a once-in-a-lifetime adventure involving a cast of unforgettable characters. There's Mr. and Mrs. Bunny, who drive a smart car, wear fedoras, and hate marmots; the Marmot, who loves garlic bread and is a brilliant translator; and many others. Translated from the Rabbit by Newbery Honor-winning author Polly Horvath, and beautifully illustrated by Caldecott Medal winner Sophie Blackall, here is a book that kids will both laugh over and love.

"National Book Award-winner Polly Horvath's latest, a rabbity romp complete with whimsical illustrations and a quirky cast of characters, has both the look and feel of a classic children's book," raves The Washington Post.

Starred Review, Booklist, February 15, 2012:
“An instant classic, with a contemporary resonance and a tone of yesteryear, fairly begging to be read aloud.”

Starred Review, Publishers Weekly, December 12, 2011:
“Energetic pacing, witty prose, and snappy dialogue coalesce in what is hopefully the first of many escapades for these unforgettable, bumbling would-be sleuths.”

Review, The Washington Post, May 2, 2012:
“National Book Award-winner Polly Horvath’s latest, a rabbity romp complete with
whimsical illustrations and a quirky cast of characters, has both the look and feel of a classic children’s book . . . Forget logic, the real fun here is in the detours, dead-ends and dangling clues that destroy all literary conventions.”

Review, The New York Times Book Review, May 13, 2012:
“Quite amusing….[her stories] give younger readers something they can readily grasp and enjoy”

MRS. BUNNY lives in Rabbitville in the Cowichan Valley on Vancouver Island, British Columbia. She is married to Mr. Bunny and has twelve children. This is her first book.

POLLY HORVATH is one of the most highly acclaimed authors writing today.  Among her many books are The Canning Season (recipient of the National Book Award and the YA Canadian Book of the Year), Everything on a Waffle (Newbery Honor Book), The Trolls (National Book Award Finalist), My One Hundred Adventures (Amazon Best of 2008 and multiple best of the year lists), and most recently, Northward to the Moon (Oprah's Book Club Kid's Reading List, Parent's Choice Gold Award). Visit her at pollyhorvath.com.

SOPHIE BLACKALL received the Caldecott Medal for Finding Winnie by Lindsay Mattick. She is the illustrator of A Fine Dessert by Emily Jenkins, a New York Times Best Illustrated Book; The Mighty Lalouche by Matthew Olshan, a School Library Journal Best Book of the Year; and Ruby's Wish by Shirin Yim Bridges, an Ezra Jack Keats New Illustrator Award winner. She has also illustrated the bestselling Ivy and Bean series by Annie Barrows. A native of Australia, she lives in Brooklyn, New York. Visit her at SophieBlackall.com
Loading...
or
Not Currently Available for Direct Purchase