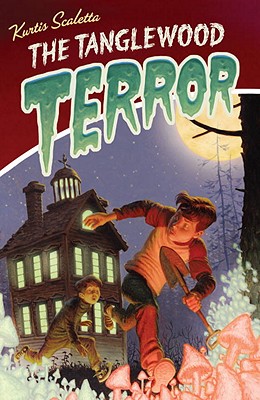 “Eric Parrish is perplexed when he discovers glowing mushrooms in the woods behind his home, but he's sure there's a scientific explanation. As the mushrooms encroach on the town, Eric deals with issues such as his parents' disintegrating marriage, friendship with a girl, and athletic aspirations. Scaletta, the author of Mudville and Mamba Point, has a keen appreciation of the issues confronting middle readers. His story is absorbing, and the situations and dialogue realistic. A great read!”
— Sally Wizik Wills, Sister Wolf Books, Park Rapids, MN
View the List

When 13-year-old Eric Parrish comes across glowing mushrooms in the woods behind his house, he's sure there's a scientific explanation. But when they start encroaching on the town—covering the football field and popping up from beneath the floorboards—Eric knows something's seriously wrong. Not that much else is going right: his parents are fighting, his little brother Brian is a little pill, and he's had a falling-out with his football team—over a pig.

Then a runaway girl from a nearby boarding school warns Eric that the fungus could portend the town's doom and leave it in rubble—just like the village that inexplicably disappeared in the exact same spot over 200 years ago. Eric, Brian, and Mandy set out to solve a very old mystery and save the town of Tanglewood.

KURTIS SCALETTA was born in Louisiana and grew up in New Mexico, North Dakota, England, Brazil, and Liberia. Kurtis now lives in Minneapolis with his wife and their son. He is also the author of Mudville and Mamba Point, both on the Knopf list.

Find out more about Kurtis on the Web at http://www.kurtisscaletta.com.
or
Not Currently Available for Direct Purchase
Copyright © 2020 American Booksellers Association