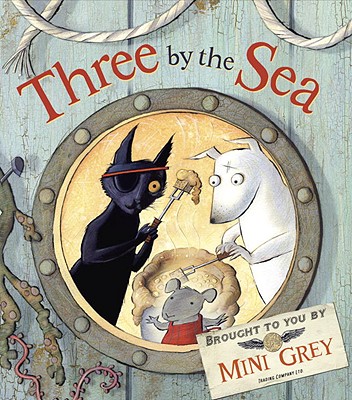 Three by the Sea (Hardcover)

Three friends, Dog, Cat, and Mouse, live happily—or so they think—in their beach hut by the sea until one night a mysterious Stranger, bearing gifts from the Winds of Change Trading Company, blows into their little world and turns it upside down. Soon Dog, Cat, and Mouse are fighting with each other. Is the foxy Stranger a troublemaker or does he mean well? And will Dog, Cat, and Mouse ever be happy again?

MINI GREY is the author/artist of the Boston Globe-Horn Book Award-winning picture book Traction Man Is Here! and its sequel, Traction Man Meets Turbodog. The books received five and six starred reviews, respectively. Her quirky, off-the-wall humor can also be seen in The Adventures of the Dish and the Spoon, The Very Smart Pea and the Princess-to-Be, Ginger Bear, and Egg Drop.

Praise For Three by the Sea…

Starred Review, Kirkus Reviews, March 1, 2011:
"Grey’s wonderfully expressive, richly textured mixed-media collages leap and bound with funny details (like the "All-Purpose Flakes" box in the kitchen, perfect for both baking and bathing). Vivacious design elements such as comic-strip–like panels for action sequences and cut strips of type for the dialogue in the climactic fight add further fun. The clear, clever text—rendered in a large font—is as fresh and invigorating as the rest."
or
Not Currently Available for Direct Purchase
Copyright © 2020 American Booksellers Association