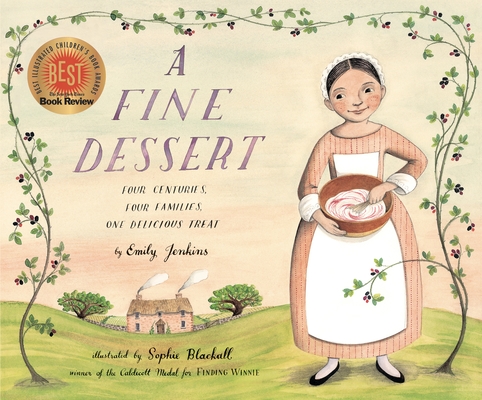 In 1710, a girl and her mother in Lyme, England, prepare a blackberry fool, picking wild blackberries and beating cream from their cow with a bundle of twigs. The same dessert is prepared by an enslaved girl and her mother in 1810 in Charleston, South Carolina; by a mother and daughter in 1910 in Boston; and finally by a boy and his father in present-day San Diego.

Kids and parents alike will delight in discovering the differences in daily life over the course of four centuries.

Includes a recipe for blackberry fool and notes from the author and illustrator about their research.

“There is no other word but delicious.”
—Kirkus Reviews, starred review

“A delicious book about a delicious treat.”
—Booklist, starred review

"This is classic Jenkins in its seemingly casual, observation-rich text; the folkloric structure of the process makes the prose rhythmic and readable, while the changing settings mark the significant historical and industrial shifts over the centuries."
—Bulletin, starred review

EMILY JENKINS has written many highly acclaimed books for children, including Water in the Park, a Booklist Editors' Choice and a Bulletin Blue Ribbon Book; Lemonade in Winter, a Publishers Weekly Best Book of the Year; and two Boston Globe–Horn Book Honor Books: Five Creatures and That New Animal. She is also the author of the popular Toys trilogy: Toys Go Out, Toy Dance Party, and Toys Come Home. She lives in Brooklyn, New York. Visit the author at emilyjenkins.com.

SOPHIE BLACKALL received the Caldecott Medal for Finding Winnie by Lindsay Mattick. She is the illustrator of The Mighty Lalouche by Matthew Olshan, a School Library Journal Best Book of the Year; Edwin Speaks Up by April Stevens, a Bank Street College of Education Best Book of the Year; and Ruby's Wish by Shirin Yim Bridges, an Ezra Jack Keats New Illustrator Award winner. She has also illustrated the Mr. and Mrs. Bunny series by Polly Horvath and the bestselling Ivy and Bean series by Annie Barrows. A native of Australia, she lives in Brooklyn, New York. Visit her at sophieblackall.com, where she has regularly posted about the process of making this book.