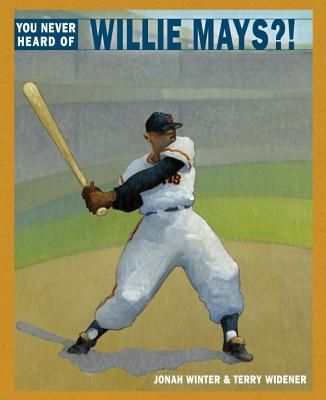 Many believe baseball great Willie Mays to be the best player that ever lived. He hit 660 home runs (fourth best of all time), had a lifetime batting average of .302, and is second only to Babe Ruth on The Sporting News's list of "Baseball's 100 Greatest Players."
In Jonah Winter and Terry Widener's fascinating picture book biography, young readers can follow Mays's unparalleled career from growing up in Birmingham, Alabama, to playing awe-inspiring ball in the Negro Leagues and then the Majors, where he was center fielder for the New York (later San Francisco) Giants. Complete with sidebars filled with stats, here is a book for all baseball lovers, young and old.
"The Say Hey Kid had style to spare, and so does this irrepressible book." --Booklist, Starred

Praise For You Never Heard of Willie Mays?!…

Starred Review, The Bulletin of the Center for Children's Books, February 2013:
“Even adults who are indifferent to baseball will likely be so drawn into Mays’ story and Winter’s rousing text that they’ll want to gather up a crowd just to read this one aloud.”

Starred Review, Kirkus Reviews, December 1, 2012:
“An all-star gem to share with grandparents, parents, children, baseball fans and anyone else.”

Starred Review, Booklist, September 1, 2012:
“The Say Hey Kid had style to spare, and so does this irrepressible book.”