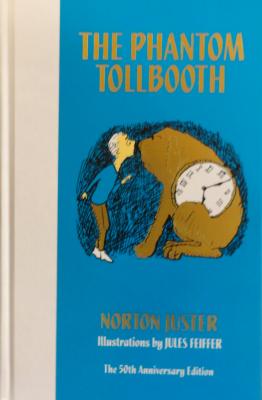 It has been fifty years and millions of readers since the world was first introduced to Milo and his adventures in the Lands Beyond with Tock, the Humbug, and the captive princesses Rhyme and Reason.
Now we have a remarkable 50th anniversary edition to honor this universally adored and deeply influential novel. This special edition will include:
Gorgeous packaging that features the classic original art stamped and debossed on the case with a transparent acetate jacket.
Brief essays from esteemed authors, educators, and artists, including Philip Pullman, Suzanne Collins, Jeanne Birdsall, Mo Willems, and several others.
Photos of the author and illustrator at the time of writing and today on the two-color endpapers.
The 35th anniversary essay by Maurice Sendak.
The complete text of the book.
A perfect gift for longstanding fans and lucky new readers, the 50th anniversary edition of The Phantom Tollbooth is a book to cherish.

Review, THE NEW YORKER, October 10, 2011:
“The fifty-year birthday of a good children’s book marks a real passage, since it means that the book hasn’t been passed just from parent to child but from parent to child and on to child again. A book that has crossed that three-generation barrier has a good chance at permanence . . . [this is] an anniversary that matters.”

NORTON JUSTER is an architect and the author of other highly acclaimed children's books, including "The Dot and the Line, The Hello, Goodbye Window," illustrated by Chris Raschka, which received the Caldecott Medal, and "The Odious Ogre," also illustrated by Jules Feiffer.

JULES FEIFFER is the author and illustrator of two novels for young readers, as well as several acclaimed picture books including "Bark, George," and "Meanwhile. . . ." He has won numerous prizes for his cartoons, plays, and screenplays.
Loading...
or
Not Currently Available for Direct Purchase