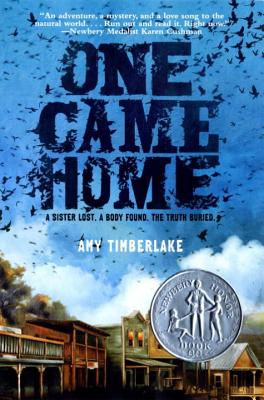 “An adventure, a mystery, and a love song to the natural world. . . . Run out and read it. Right now.”—Newbery Medalist Karen Cushman


In the town of Placid, Wisconsin, in 1871, Georgie Burkhardt is known for two things: her uncanny aim with a rifle and her habit of speaking her mind plainly.

But when Georgie blurts out something she shouldn't, her older sister Agatha flees, running off with a pack of "pigeoners" trailing the passenger pigeon migration. And when the sheriff returns to town with an unidentifiable body—wearing Agatha's blue-green ball gown—everyone assumes the worst. Except Georgie. Refusing to believe the facts that are laid down (and coffined) before her, Georgie sets out on a journey to find her sister. She will track every last clue and shred of evidence to bring Agatha home. Yet even with resolute determination and her trusty Springfield single-shot, Georgie is not prepared for what she faces on the western frontier.

Praise For One Came Home…

Starred Review, The Bulletin of the Center for Children's Books, February 2013:
“With its historical backdrop, enjoyable narrative, and endearing heroine, this will appeal both to fans of Philbrick’s The Mostly True Adventures of Homer P. Figg and Kelly’s The Evolution of Calpurnia Tate.”

Starred Review, The Horn Book, January/February 2013:
“…it’s Georgie’s voice that really brings the story to life, with its original, folksy turns of phrase and self-deprecating humor that make it as entertaining to read as a Christopher Paul Curtis novel.”

Starred Review, Kirkus Reviews, December 1, 2012:
“Georgie's story will capture readers' imaginations with the very first sentences and then hold them hostage until the final page is turned.”

AMY TIMBERLAKE is the author of the Newbery Honor book One Came Home, as well as the middle-grade novel That Girl Lucy Moon and picture book The Dirty Cowboy, winner of the Golden Kite Award. Amy has worked as a book reviewer, columnist, and children's bookseller. She grew up in a small town in Wisconsin, and now lives in Chicago. Visit her at AmyTimberlake.com.
Loading...
or
Not Currently Available for Direct Purchase