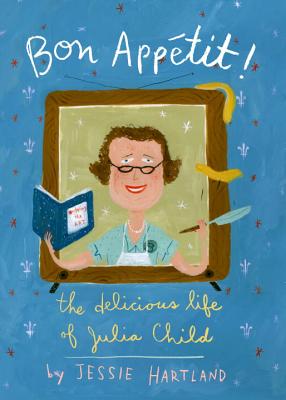 In a starred review, Publishers Weekly raves, "Chef and TV personality Julia Child likely would have delighted in and hooted over this wide-ranging picture-book biography.... Readers young and old will devour this fete pour les yeux."

Follow Julia Child—chef, author, and television personality—from her childhood in Pasadena, California, to her life as a spy in WWII, to the cooking classes she took in Paris, to the publication of Mastering the Art of French Cooking, to the funny moments of being a chef on TV. This is a comprehensive and enchanting picture book biography, told in many panels and jam-packed with lively, humorous, and child-friendly details. Young chefs and Julia Child fans will exclaim, "ooooh la la," about this book, which is as energetic and eccentric as the chef herself.

Praise For Bon Appetit! The Delicious Life of Julia Child…

Chicago Tribune, June 27, 2012:
"Hartland deftly portrays in both word and drawing the awkward grace, the passionate personality and the spunky gusto of her subject. At times, you can practically hear Julia's trademark trill leaping cheerily out of the pages.”

Wall Street Journal, August 4, 2012:
"A charming introduction to the woman and her career, told in cluttered-yet-delightful illustratinos and exuberant hand-lettered text."

Boston Globe, August 14, 2012:
"Author Jessie Hartland chronicles Child’s rise to fame in a unique way. The book has the look and feel of a scrapbook, with handwritten text and numerous doodles that make it a fun read."

Epicurious.com, July 13, 2012:
"Visually, it's just delightful; Hartland captures the boundless energy, the joie de vivre that I imagine Julia exuded in person. And just in time for Bastille Day, there's a crêpe recipe for you to try."

Starred Review, Booklist, July 1, 2012:
“...achieves a feel that is a perfect match for Child’s personality and cooking style: exuberant, messy, gangly, and charming."

Kirkus Reviews, April 1, 2012:
"Lively tableaux deliver an affectionate tribute to this strong-minded woman…While these stories may be familiar to adult readers, they are here perfectly pitched to introduce the determined woman who became synonymous with French cooking in America.”

School Library Journal, May 2012:
"Books for young foodies are very popular, and this is one that any library embracing the trend should have...Hartland’s style makes for a quick but informative read that portrays Child as a fascinating, groundbreaking, but still grounded person. Children interested in food and cooking will get a lot out of the book."

JESSIE HARTLAND is the author of eight picture books for children, including her most recent, How the Sphinx Got to the Museum, which Booklist, in a starred review, called "exhaustive, dizzying, yet crystal clear [in] detail." Jessie Hartland is also a commercial artist whose work can be seen on ceramics and fabric, as well as in advertisments. An avid cook, Jessie traveled to Paris and the French countryside to research this book. Jessie divides her time between a house near the water on Long Island and a loft in lower Manhattan, New York. Learn more at jessiehartland.com.
Loading...
or support indie stores by buying on
(This book is on backorder)