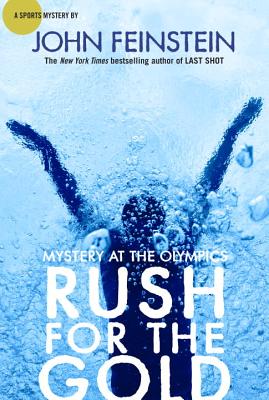 Rush for the Gold

Mystery at the Olympics

"New York Times"bestselling sportswriter John Feinstein dives headfirst into a scandal of Olympic proportions in this exciting sports mystery.
Teen sports reporter Susan Carol is competing as a swimmer at her first-ever Olympic games. It's the opportunity of a lifetime, and her best friend Stevie is both amazed and envious. Usually they cover sporting events together, now he's covering" her." But Stevie can't shake the feeling that something's not right. Everyone wants a piece of Susan Carol's success--agents, sponsors, the media. Just how far will they go to ensure that America's newest Olympic darling wins gold?
John Feinstein has been praised as "the best writer of sports books in America today" ("The Boston Globe"), and he proves it again in this fast-paced novel.


Praise For Rush for the Gold: Mystery at the Olympics…

Booklist, May 1, 2012:
"As in his earlier books in the series, the popular Feinstein takes readers inside a major sports venue, supplies fascinating details, and serves up a satisfying mystery."

Kirkus Reviews, April 1, 2012:
"As is his wont, Feinstein salts the cast with real athletes and other figures from Michael Phelps to Bob Costas. He folds plenty of dramatic sports action as well as behind-the-scenes banter and personal and family conflict into a plot that moves smoothly to a suspenseful climax...A fast-paced caper."

JOHN FEINSTEIN is the author of many bestselling books, including "A Season on the Brink "and "A Good Walk Spoiled." His books for young readers offer a winning combination of sports, action, and intrigue, with "Last Shot" receiving the Edgar Allan Poe Award for best young adult mystery of the year. He lives in Potomac, Maryland, and Shelter Island, New York, with his family.
Loading...
or
Not Currently Available for Direct Purchase