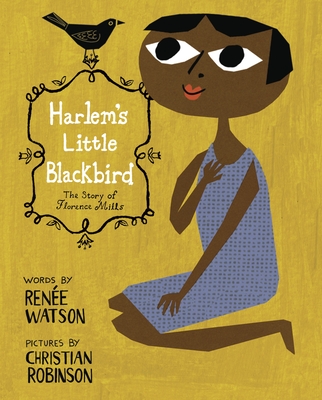 The Story of Florence Mills

Born to parents who were both former slaves, Florence Mills knew at an early age that she loved to sing, and that her sweet, bird-like voice, resonated with those who heard her. Performing catapulted her all the way to the stages of 1920s Broadway where she inspired everyone from songwriters to playwrights. Yet with all her success, she knew firsthand how prejudice shaped her world and the world of those around her. As a result, Florence chose to support and promote works by her fellow black performers while heralding a call for their civil rights. Featuring a moving text and colorful illustrations, Harlem's Little Blackbird is a timeless story about justice, equality, and the importance of following one's heart and dreams.


A CARTER G. WOODSON ELEMENTARY HONOR BOOK
(awarded by the National Council for the Social Studies, 2013)

Praise For Harlem's Little Blackbird: The Story of Florence Mills…

Starred Review, Booklist, June 2012:
“With a text that stylistically sings yet is packed with information, the book introduces a woman who, though part of the Harlem Renaissance, is not well remembered by history.”

RENÉE WATSON is the author of the children’s picture book, A Place Where Hurricanes Happen (Random House, June 2010), which was featured on NBC Nightly News with Brian Williams. Her middle grade novel, What Momma Left Me debuted as the New Voice for 2010 in middle grade fiction by The Independent Children's Booksellers Association. Renée has worked as a teaching-artist for more than 10 years, teaching creative writing and theater to elementary, middle, and high school students. She also uses writing and drama therapy to work with youth and adults. Renée lives in New York, NY.

Christian Robinson is “one of the most exciting children’s book artists working today,” according to the New York Times. He received a Caldecott Honor for Last Stop on Market Street by Matt de la Pena, which was also a Newbery Medal winner and a New York Times Bestseller. He also illustrated Rain! by Linda Ashman, winner of the Ezra Jack Keats New Illustrator Award, and Josephine by Patricia Hruby Powell, recipient of a Boston Globe–Horn Book Honor and a Coretta Scott King Illustrator Honor. He lives in San Francisco. Learn more at TheArtOfFun.com.
or support indie stores by buying on