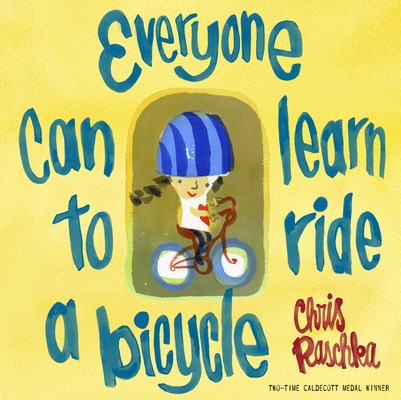 Everyone Can Learn to Ride a Bicycle

“[Raschka's] marvelous sequences, fluid style, and emotional intelligence capture all of the momentum and exhilaration of this glorious accomplishment,” raves School Library Journal in a starred review.

Learning to ride a bike is one of the most important milestones of childhood, and no one captures the emotional ups and downs of the experience better than Chris Raschka, who won the 2012 Caldecott Medal for A Ball for Daisy. In this simple yet emotionally rich "guide," a father takes his daughter through all the steps in the process—from choosing the perfect bicycle to that triumphant first successful ride. Using very few words and lots of expressive pictures, here is a picture book that not only shows kids how to learn to ride, but captures what it feels like to fall . . . get up . . . fall again . . . and finally "by luck, grace, and determination" ride a bicycle!

Praise For Everyone Can Learn to Ride a Bicycle…

Starred Review, Publishers Weekly, February 25, 2013:
“Adults will close the book with a lump in their throats, children with a firm sense of purpose.”

Starred Review, Kirkus Reviews, March 15, 2013:
“A wry, respectful ode to a rite of passage that’s both commonplace and marvelous. This is one fun ride!”

Starred Review, School Library Journal, March 2013:
“The artist’s marvelous sequences, fluid style, and emotional intelligence capture all of the momentum and exhilaration of this glorious accomplishment.”

CHRIS RASCHKA, the 2012 Caldecott Medalist, is an avid bike rider and wrote a 2010 New York Times op-ed piece, "Braking Away," about the importance of obeying the rules of the road while on a bicycle. He has written and/or illustrated over 30 books for children, including the 2012 Caldecott Medal winner A Ball for Daisy, which was also a New York Times Best Illustrated Book and described byThe Horn Book in a starred review as "noteworthy for both its artistry and its child appeal." His other books include the 2006 Caldecott Medal winner, The Hello, Goodbye Window by Norton Juster; the Caldecott Honor Book Yo? Yes!, and the ALA-ALSC Notable Children's Book Good Sports.
Loading...
or support indie stores by buying on
(This book is on backorder)