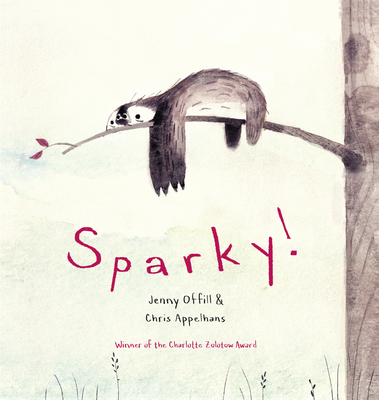 The ingenious author of 17 Things I'm Not Allowed to Do Anymore and a brilliant illustrator and production designer of the Coraline movie have created a hilarious, touching picture book perfect for young animal lovers. Like the Caldecott Medal-winning Officer Buckle and Gloria, Sparky stars a pet who has more to offer than meets the eye. When our narrator orders a sloth through the mail, the creature that arrives isn't good at tricks or hide-and-seek . . . or much of anything. Still, there's something about Sparky that is irresistible.

Winner of the Charlotte Zolotow Award

Chris Appelhans was selected as the Children’s Choice Illustrator of the Year at the Children’s Choice Book Awards for Sparky!, his first picture book. The book received two starred reviews, including one from Booklist declaring, “Appelhans is a revelation.” Chris has also worked on several films, as an illustrator and a production designer for Coraline, an environment designer for Fantastic Mr. Fox, and a visual development artist for The Princess and the Frog.
Loading...
or support indie stores by buying on