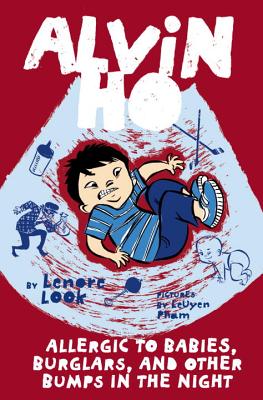 Allergic to Babies, Burglars, and Other Bumps in the Night

Here is the fifth book in the beloved and hilarious Alvin Ho chapter book series, which has been compared to Diary of a Wimpy Kid and is perfect for beginning and reluctant readers.

Alvin, an Asian American second grader who's afraid of everything, has started to notice his mother getting bigger . . . and bigger. Alvin's sure it's all the mochi cakes she's been eating, but it turns out she's pregnant! There are lots of scary things about babies, as everybody knows. There's learning CPR for the newborn and changing diapers (no way). But the scariest thing of all is the fact that the baby could be a GIRL. As a result of the stress, Alvin puts on a few pounds and—in one hilarious misunderstanding—worries that he might actually be pregnant, too!

LeUyen Pham is the illustrator of the Alvin Ho series, as well as The Best Birthday Party Ever by Jennifer LaRue Huget; Grace for President by Kelly DiPucchio, a New York Times bestseller; and the Freckleface Strawberry series by Julianne Moore. She is the author and illustrator of the picture books Big Sister, Little Sister and All the Things I Love About You. LeUyen lives in San Francisco. Learn more at leuyenpham.com.
Loading...
or
Not Currently Available for Direct Purchase