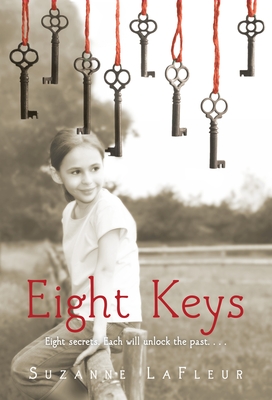 Elise and Franklin have always been best friends. Elise has always lived in the big house with her loving Uncle and Aunt, because Elise's parents died when she was too young to remember them.  There's always been a barn behind the house with eight locked doors on the second floor.
When Elise and Franklin start middle school, things feel all wrong. Bullying. Not fitting in. Franklin suddenly seems babyish.  Then, soon after her 12th birthday, Elise receives a mysterious key left for her by her father. A key that unlocks one of the eight doors upstairs in the bar . . .

Starred Review, Publishers Weekly, June 6, 2011:
"LaFleur (Love, Aubrey) writes with uncommon sensitivity to the fraught period between childhood and the teenage years, when friendships balance on a razor's edge and nothing feels certain. The heart of the story lies in the layered relationships and characters that give the novel its powerful sense of realism."

SUZANNE LAFLEUR received her MFA in writing for children from The New School. This is her second novel.
Loading...
or support indie stores by buying on