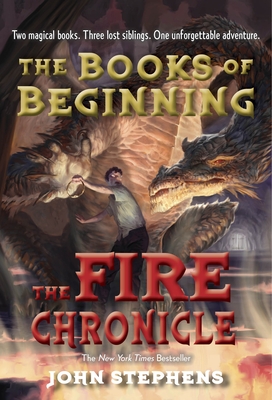 The Fire Chronicle (Books of Beginning #2)

“Three siblings with a mystical destiny tied to books of magic are tossed into the fray again. In this sequel to The Emerald Atlas, middle brother Michael must rise to incredible challenges, while older sister Kate tries to thwart a grim prophecy. The cast of characters widens as more becomes known about The Books of Beginning and those who hunt them. Fabulous settings and richly drawn characters set this fantasy trilogy head and shoulders above most.”
— Rosemary Pugliese, Quail Ridge Books, Raleigh, NC
View the List

After the tumultuous events of last winter, Kate, Michael, and Emma long to continue the hunt for their missing parents. But they themselves are now in great danger, and so the wizard Stanislaus Pym hides the children at the Edgar Allan Poe Home for Hopeless and Incorrigible Orphans. There, he says, they will be safe. How wrong he is.

The children are soon discovered by their enemies, and a frantic chase sends Kate a hundred years into the past, to a perilous, enchanted New York City. Searching for a way back to her brother and sister, she meets a mysterious boy whose fate is intricately—and dangerously—tied to her own.

Meanwhile, Michael and Emma have set off to find the second of the Books of Beginning. A series of clues leads them into a hidden world where they must brave harsh polar storms, track down an ancient order of warriors, and confront terrible monsters. Will Michael and Emma find the legendary book of fire—and master its powers—before Kate is lost to them forever?

Exciting, suspenseful, and brimming with humor and heart, the next installment of the bestselling Books of Beginning trilogy will lead Kate, Michael, and Emma closer to their family—and to the magic that could save, or destroy, them all.

Praise For The Fire Chronicle (Books of Beginning #2)…

Starred Review, Publishers Weekly, October 8, 2012:
“Fans of The Emerald Atlas will find much to love: the adventure-driven plot, a scattering of deliciously scary moments, and Stephens’s offbeat take on Tolkienesque dragons, dwarves, and elves are sure to delight.”

Starred Review, School Library Journal, October 1, 2012:
“Fans of the first book won’t be disappointed, and will eagerly anticipate the next one. The Emerald Atlas was very good. This one is even better.”

John Stephens is also the author of The Emerald Atlas, the first installment in the Books of Beginning trilogy.  John received his MFA from the University of Virginia, and went on to write and produce television for ten years.  During this time, he read His Dark Materials by Philip Pullman and fell in love with fantasy for young readers.  He spent the next several years waking at 4 AM every morning to write The Emerald Atlas before heading to work for the day.
John lives in Los Angeles with his wife and son and their dog, Bug. Visit BooksofBeginning.com to find out more about The Fire Chronicle, the Books of Beginning, and John.
Loading...
or
Not Currently Available for Direct Purchase