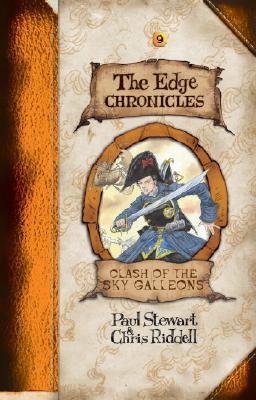 Clash of the Sky Galleons

In the penultimate book in the Edge Chronicles series, Quint is travelling with his father, Wind Jackal, on a mission to track down and bring to justice Turbot Smeal, the man who started the fire that killed their family. Having left behind his studies at the Knights Academy, Quint is now eager to learn from his father what it really means to be a sky pirate. But, consumed by his desire to capture Smeal, Wind Jackal’ s judgment is flawed, and his actions endanger the lives of his crew — and his son.

As they travel from the taverns and backstreets of Undertown and the wonders of the shipbuilders’ yards, to the dark dangers of the Deepwoods, Quint and Maris become separated from the rest of the crew. Finally, at the mysterious, ghostly sky-wreck in Open Sky, they discover the truth about Smeal.


Praise For Edge Chronicles 9: Clash of the Sky Galleons…

Chris Riddell is the co-creator of the bestselling Edge Chronicles series, with Paul Stewart. He has illustrated many children's books including the award-winning Pirate Diary. He is also the political cartoonist for the "Guardian" and "Observer" newspapers.

Paul Stewart is the co-creator of the bestselling Edge Chronicles series, with Chris Riddell. He is also the author of a number of previous titles for children including The Wakening.
Loading...
or
Not Currently Available for Direct Purchase