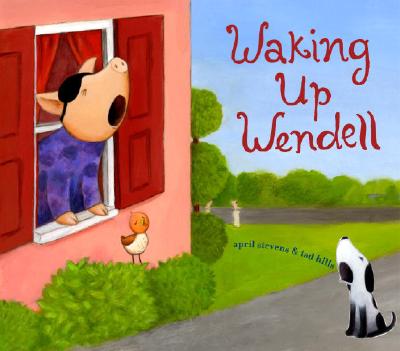 
So starts the story of how a chain of events results in everyone on one street waking up. The bird's song awakens Mr. Krudwig at #2 Fish Street, whose grumbling wakes up Leopold, his dog, who barks "RAPPITYRAPPITY-RAP RAPPITY-RAPPITY-RAP" . . . and wakes up Mrs. Musky, at #3 Fish Street. The antics go on and on until, finally, Lilah Hall's singing in the shower at #9 awakens the last person left who is still asleep, none other than the littlest resident at #10 Fish Street: baby Wendell Willamore.


Praise For Waking Up Wendell…

Starred Review, Publishers Weekly, September 3, 2007:
"With its punchy prose, unexpected plot turns and surprisingly sweet ending, it's a cinch for a read-aloud treat."

Starred Review, Kirkus Reviews, August 1, 2007:
"As absolutely charming as a sunny morning can be."