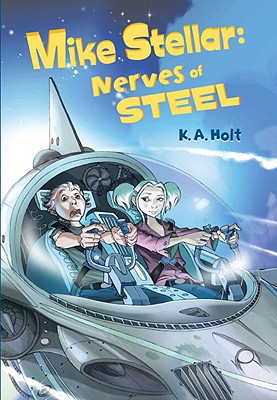 Blast off to deep-space adventure and hijinks!


Things are not so stellar for Mike Stellar. He is stunned when his parents inform him that he has only eight hours to pack before they move to Mars. Despite the fact that he suspects his parents are involved in a major sabotage plot; that the only person who believes him is a girl who won’t shut up; and that his mother’s assistant seems to be spying on Mike’s every move, Mike is dealing with the same things that every eleven-year-old deals with: bad cafeteria food, a strict limitation on his electronic use, and a teacher who is so old-fashioned she must be from the year 2099.

With great humor and lots of action, K. A. Holt’s first novel is set to give summer reading an out-of-this-world blast of fun.

K. A. Holt lives a life of mayhem in Austin, Texas, with her husband, three children, and an annoying dog. When she is not writing space adventures or daydreaming about time-travel, she enjoys eating lots and lots of chocolate and watching too much television. "From the Hardcover edition."
Loading...
or
Not Currently Available for Direct Purchase