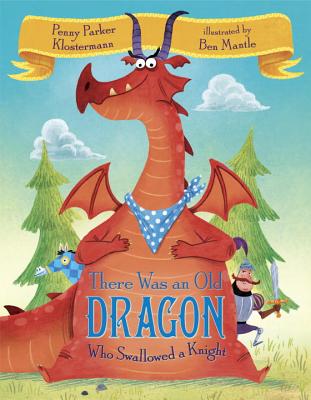 There Was an Old Dragon Who Swallowed a Knight

We all know that "there was an old lady" who swallowed lots of things. Now meet the old dragon who swallows pretty much an entire kingdom Will he ever learn a little moderation? This rollicking rhyme is full to bursting with sight gags, silly characters, and plenty of burps Parents and kids alike will delight in Ben Mantle's precisely funny illustrations and in Penny Parker Klostermann's wacky rhymes.
In days of yore, before a certain fly's ultimately fatal encounter with an Old Lady, there was an old dragon who felt rather peckish. "There was an old dragon who swallowed a knight. / I don't know why he swallowed the knight // It's not polite " He follows the knight with the knight's steed ("that galloped around at a terrible speed"). Then a squire, a cook, a lady, a castle, and finally a moat are each swallowed in turn. But..."With all of that water, he started to bloat. / And that's when the dragon roared, and I quote: / 'Okay, enough I've had enough-- / More than enough of this swallowing stuff ' " So realizing that eating all those things might have been "a tad impolite," the old dragon burps them all out in reverse except the knight (which is "ahhh...just right"). Klostermann's debut is a rollicking and warped Medieval take on the well-worn cumulative rhyme. Prolific British animator and illustrator Mantle's expressive and bright cartoon illustrations of the red, horned dragon (and the contents of his stomach) are a perfect match. The antics within the dragon's stomach--every image of the steed is accompanied by a little "clippity, clippity, clippity, clop" in teeny type--and his copious burping will leave 'em laughing. No matter how many swallowed-fly titles you own, this one belongs on your shelf too. KIrkus, May 1,2015 From the Hardcover edition.

PENNY PARKER KLOSTERMANN loves trout fishing, digging for earthworms, and her sisters! This is her first picture book. BEN MANTLE has most recently been working as a children's book illustrator from his shared studio in Brighton, England. He also produces screen prints and digital artwork for exhibition. Ben Mantle has illustrated numerous picture books, including the popular board book Five Little Pumpkins.
Loading...
or
Not Currently Available for Direct Purchase