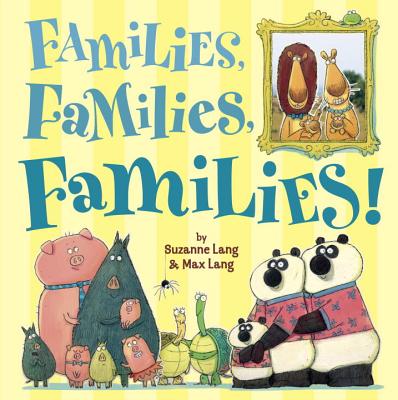 No matter your size, shape, or pedigree--if you love each other, you are a family Moms, dads, sisters, brothers -- and even Great Aunt Sue -- appear in dozens of combinations, demonstrating all kinds of nontraditional families Silly animals are cleverly depicted in framed portraits, and offer a warm celebration of family love. From School Library Journal
PreS-Gr 1--Imagine a house with many rooms, whose walls each have a different color or wallpaper, accenting a family portrait hanging there. On a rustic wooden wall hangs the first portrait--a large family of ducks posing beside a still pond. The next spread shows three pandas in pink vests, much like the pink oriental wallpaper behind them. Each portrait features a gently rhyming line: "Some children live with their grandparents.../and some live with an aunt./Some children have many pets.../and some just have a plant." All of these appealing images demonstrate different ways of being a family. "Some children live with their father./ Some children have two mothers./Some children are adopted./Some have stepsisters and--brothers." The cartoon-style critters contrast pleasantly with more realistic elements--a bamboo plant, a slender ceramic dog, a fat ceramic cat. Families of hippos, tigers, lions, ostriches, and whales join the other family groups in the final spread. The loud-and-clear message is that "if you love each other, then you are a family." And imagine the many children who will be reassured because they have found a portrait of a family they will recognize as their own. A solid choice for most libraries.--Mary Jean Smith, formerly at Southside Elementary School, Lebanon, TN From the Hardcover edition.

SUZANNE LANG produces, develops, and writes for children's television. Formerly with Cartoon Network, she is presently the story editor on an animated comedy series for Cake Entertainment and Copa Studios. Suzanne has a BFA in film and television from New York University's Tisch School of the Arts. MAX LANG is an animation director, storyboard artist, character designer, and illustrator. He co-directed the film adaptation of the picture book The Gruffalo, which was nominated for an Oscar and a BAFTA, as well as the Oscar-nominated adaptation of the picture book Room on the Broom, which has won numerous awards, including the Cristal for Best TV Production at the Annecy International Animation Film Festival. From the Hardcover edition.
or
Not Currently Available for Direct Purchase
Copyright © 2020 American Booksellers Association