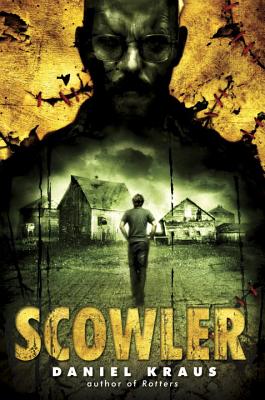 Equal parts haunting and horrifying, thisliterary horror novel gives readers insight into the mind of a controlling homicidal man and the son who must stop him.
"Marvin Burke is one of the great monsters of literature, a figure of immense, credible terror and savagery."--Cory Doctorow, author of Little Children and coeditor of Boing Boing
Imagine your father is a monster. Would that mean there are monsters inside you, too?

Nineteen-year-old Ry Burke, his mother, and little sister eke out a living on their dying family farm. Ry wishes for anything to distract him from the grim memories of his father's physical and emotional abuse. Then a meteorite falls from the sky, bringing with it not only a fragment from another world but also the arrival of a ruthless man intent on destroying the entire family. Soon Ry is forced to defend himself by resurrecting a trio of imaginary childhood protectors: kindly Mr. Furrington, wise Jesus, and the bloodthirsty Scowler.

DANIEL KRAUS is a writer, an editor, and a filmmaker. He lives with his wife in Chicago. His newest work, Trollhunters, is written with Guillermo del Toro. Visit him at DanielKraus.com and follow him on Twitter @DanielDKraus. From the Hardcover edition.
Loading...
or
Not Currently Available for Direct Purchase