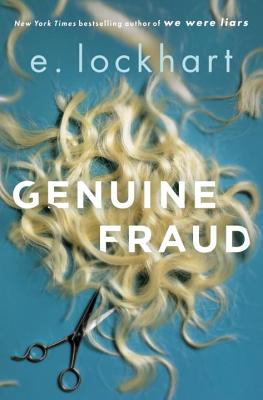 From the author of We Were Liars, which John Green called "utterly unforgettable," comes a unique novel that showcases E. Lockhart’s unmatched ability to play with style and deliver a perfectly plotted, well-written novel with a surprise twist.

Be among the first to meet Imogen and Jule!

Imogen is a runaway heiress, an orphan, a cook, and a cheat.
Jule is a fighter, a social chameleon, and an athlete.
An intense friendship. A disappearance. A murder, or maybe two.
A bad romance, or maybe three.
Blunt objects, disguises, blood, and chocolate. The American dream, superheroes, spies, and villains.
A girl who refuses to give people what they want from her.
A girl who refuses to be the person she once was.

"You will devour it." —Gayle Forman, bestselling author of If I Stay

“Fans of E. Lockhart’s We Were Liars will love this . . . and definitely won’t see the ending coming.”  —HelloGiggles.com

“Tangled secrets, diabolical lies and, ultimately, a mind-blowing outcome are crafted with the plotted precision we expect (and love!) from E. Lockhart.” —Justine Magazine

“As with E. Lockhart's previous novel, the best-selling "We Were Liars," [readers] will likely finish the last page and flip right back to the beginning to search for clues they missed.” —Chicago Tribune

“A bracing pace, a slew of far-flung locations, and a storyline that runs mostly in reverse will keep readers on their toes, never entirely sure of what these girls are responsible for or capable of.” —Publishers Weekly, Starred Review

“This thriller from the author of We Were Liars will challenge preconceptions about identity and keep readers guessing.” —Kirkus Reviews, Starred Review

Praise for E. Lockhart’s We Were Liars:

“[It] will leave you dying to talk about the book with a pal or ten.” —Parade.com

“You’re going to want to remember the title. Liars details the summers of a girl who harbors a dark secret, and delivers a satisfying but shocking twist ending.” —Entertainment Weekly

“An ambitious novel with an engaging voice, a clever plot and some terrific writing.” —The New York Times Book Review

“Thrilling, beautiful, and blisteringly smart, We Were Liars is utterly unforgettable.” —John Green, #1 New York Times bestselling author of The Fault in Our Stars

E. Lockhart wrote the New York Times bestseller We Were Liars, which is also available in a deluxe edition. Her other books include Fly on the Wall, Dramarama, The Disreputable History of Frankie Landau-Banks, and the Ruby Oliver Quartet, which includes The Boyfriend List, The Boy Book, The Treasure Map of Boys, and Real Live Boyfriends. Visit her online at emilylockhart.com, and follow @elockhart on Twitter.
Loading...
or
Not Currently Available for Direct Purchase