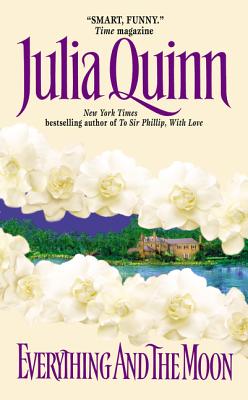 Everything and the Moon

It was indisputably love at first sight. But Victoria Lyndon was merely the teenaged daughter of a vicar. . .while Robert Kemble was the dashing young earl of Macclesfield. Surely what their meddlesome fathers insisted must have been true-that he was a reckless seducer determined to destroy her innocence. . . and she was a shameless fortune hunter. So it most certainly was for the best when their plans to elope went hopelessly awry.

Even after a seven-year separation, Victoria-now a governess-still leaves Robert breathless. But how could he ever again trust the raven-haired deceiver who had shattered his soul? And Victoria could never give her heart a second time to the cad who so callously trampled on it the first. But a passion fated will not be denied, and vows of love yearn to be kept. . . even when one promises the moon.