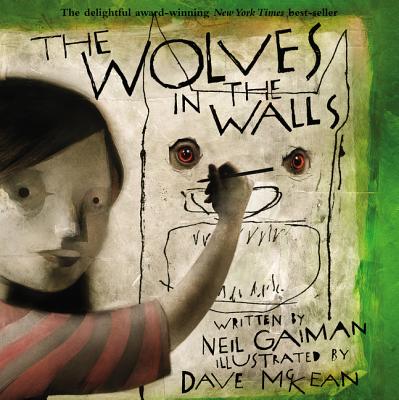 "Gaiman does here for the older picture-book set what he did for middle-grade readers with Coraline." —Kirkus (starred review)

But it's not all over. Instead, Lucy's battle with the wolves is only just beginning.

There are sneaking, creeping, crumpling noises coming from inside the walls...

This New York Times Best Illustrated Book combines a deliciously creepy tale, a strong heroine, and a happy ending in a package that only Neil Gaiman and Dave McKean could have created.


Praise For The Wolves in the Walls…

“The illustrations are amazing. And, like every good scary story, there’s an unexpected twist at the end.” — Washington Post

“Gaiman has one creepy imagination. Hand this to a jaded third or fourth-grader and watch their eyes get big.” — Bulletin of the Center for Children’s Books

“This is a picture book for the twenty-first century child: visually and emotionally sophisticated, accessible, and inspired.” — ALA Booklist

“Children will delight in the “scary, creepy” tone and in the brave behavior displayed by the intrepid young heroine.” — School Library Journal

“Madly inventive, madly funny. Some will find it creepy; for the rest it will offer the sustaining jam of life.” — The Guardian (UK)

“Spectacular…atmospheric, sinister, scary, and funny…This is a book for cool kids who will grow up to be fearless.” — Sunday Times (London)