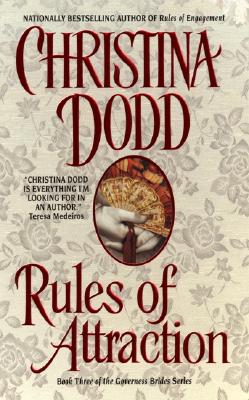 The Rules of Enticement:

After nine years, Hannah Setterington has decided tosell the Distinguished Academy of Governesses and explore the secrets of her past. To that end she has agreed to be a companion to the elderly aunt of Lord Raeburn, a man enshrouded by dark mystery and haunted by the rumor that he murdered his wife. A strong-minded woman accustomed to the vagaries of nobility, Hannah believes the rumor to be so much piffle, until she comes face to face with Lord Raeburn.

Dougald Pippard, Lord Raeburn, is deviously satisfied when his plan to trap Hannah springs itself successfully. But his satisfaction is short-lived as the indomitable Hannah draws the battle lines and kisses him with the pent-up passion Dougald hasn't felt for nine long years. The fire that has always flared between them rages again with every touch, every glance,until Dougald is almost ready to forget his wounded memories and plans of revenge for just one more night with her.