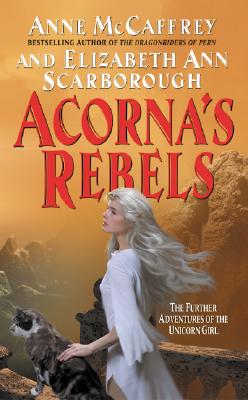 Acorna's people, the Linyaari, have begun reclaiming their homeworld from the ravages of the brutal Khleevi. But the first wave of explorers has unlocked a larger mystery about the origins of the Linyaari -- one that has led Aari, Acorna's beloved lifemate, on a dangerous journey from which he may never return.

Setting off on a quest to find Aari, Acorna and her friends -- Captain Becker, Mac, Nadhari, and RK -- are forced to crash land on the beautiful and barbaric exotic jungle world of Makahomia, home of the mysterious Temple Cats. But an evil scheme threatens to destroy the sacred felines. To save the cats, Acorna will lead a band of rebels on a journey into Makahomia's temples and hidden sanctuaries.

And there, within one sacred shrine, she will discover shocking information that could lead to Aari . . .or to disaster.