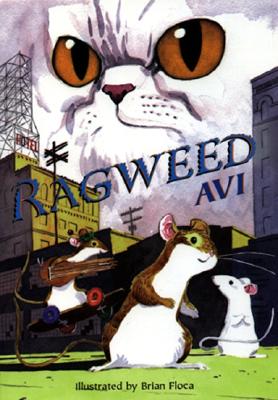 A prequel to Avi's award-winning Poppy , this is the story of Ragweed, the mouse Poppy loved and lost. Long before Ragweed finds his way to Dimwood Forest and to Poppy, he leaves his family and serene country home behind and sets off by train for the big city, a place fraught with cars, buses, music, pleasure, excitement, attitude and danger--chiefly in the form of cats!

Silversides, for instance, is an urbane specimen in a pink polyvinyl collar studded with diamond-like sequins. Founder and president of F.E.A.R.(Felines Enraged About Rodents), an organization dedicated to keeping cats on top, people in the middle, and mice on the bottom. Silversides and club vice president Graybar, stalks her prey relentlessly.

Ragweed befriends hipster band members Clutch, Dipstick and Lugnut as well as Blinker, a timid and vulnerable pet-store mouse. Through these friends, he discovers a world where courage and loyalty are the keys to survival. In so doing, Ragweed learns to trust himself and take charge of his destiny.

Together the mice transform an abandoned bookstore into a cool new club, the Cafe Independent, and plan a blowout--and cat-free--opening night. But with Silversides and Graybar prowling the sewers, just how long can their independence last?