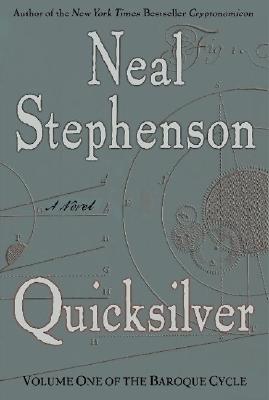 Volume One of The Baroque Cycle

It is the story of Daniel Waterhouse, fearless thinker and conflicted Puritan, pursuing knowledge in the company of the greatest minds of Baroque-era Europe, in a chaotic world where reason wars with the bloody ambitions of the mighty, and where catastrophe, natural or otherwise, can alter the political landscape overnight. It is a chronicle of the breathtaking exploits of "Half-Cocked Jack" Shaftoe -- London street urchin turned swashbuckling adventurer and legendary King of the Vagabonds -- risking life and limb for fortune and love while slowly maddening from the pox ... and Eliza, rescued by Jack from a Turkish harem to become spy, confidante, and pawn of royals in order to reinvent a contentious continent through the newborn power of finance.

A gloriously rich, entertaining, and endlessly inventive novel that brings a remarkable age and its momentous events to vivid life -- a historical epic populated by the likes of Samuel Pepys, Isaac Newton, William of Orange, Benjamin Franklin, and King Louis XIV -- Quicksilver is an extraordinary achievement from one of the most original and important literary talents of our time.

And it's just the beginning ...


Praise For Quicksilver: Volume One of The Baroque Cycle…

“Stephenson’s new machine is a wonderment to behold. A-”
— Entertainment Weekly

“[QUICKSILVER] is a rare thing: a 1,000-page book that you don’t want to end.
— San Antonio Express-News