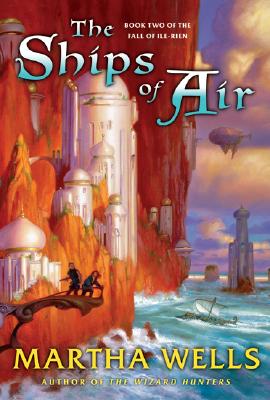 The Ships of Air

Book Two of the Fall of Ile-Rien

Known for her lush, intricate worlds and complex characters, acclaimed author Martha Wells has delighted readers with her extraordinary fantasy novels of daring and wit. With The Wizard Hunters she launched her most ambitious undertaking yet -- the return to the beloved world of the Nebula Award-nominated The Death of the Necromancer and The Fall of Ile-Rien. Now the saga continues in a triumph of suspense and imagination.

Despite a valiant struggle against superior forces, the country of Ile-Rien has fallen to the onslaught of the relentless Gardier, a faceless army of sorcerers determined to conquer all civilization.

To save the remnants of her country, former playwright Tremaine Valiarde undertakes an epic journey to stop the Gardier. Rescuing the proud ship Queen Ravenna from destruction, Tremaine and a resolute band of sorcerers and warriors set sail across magical seas on a voyage of danger and discovery. For the secret to defeating the enemy -- and to rescuing the world from the Gardier's inimitable hatred -- lies far beyond the walls of the world, and only the tenuous ties of friendship and honor will keep the band together.

But the Gardier are not the only evil in this tumultuous world, and an ancient terror stalks the ornate rooms and shadowy decks of the Queen Ravenna -- a force so malevolent and enigmatic that even the growing power of the sorcerer's sphere may not be enough to save Ile-Rien from utter ruin.


Praise For The Ships of Air: Book Two of the Fall of Ile-Rien…

Martha Wells is the author of five previous novels: The Wizard Hunters, the first book of the Fall of Ile-Rien, The Element of Fire, City of Bones, Wheel of the Infinite, and The Death of the Necromancer, which was nominated for the Nebula Award. She lives in College Station, Texas, with her husband.