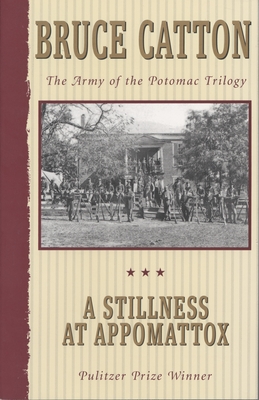 A Stillness at Appomattox

The Army of the Potomac Trilogy

Recounting the final year of the Civil War, this classic volume by Bruce Catton won both the Pulitzer Prize and the National Book Award for excellence in non-fiction.

In this final volume of the Army of the Potomac Trilogy, Catton, America's foremost Civil War historian, takes the reader through the battles of the Wilderness, the Bloody Angle, Cold Harbot, the Crater, and on through the horrible months to one moment at Appomattox. Grant, Meade, Sheridan, and Lee vividly come to life in all their failings and triumphs.

Bruce Catton was born in Petoskey, Michigan, in 1899. A United States journalist and writer, Catton was one of America’s most popular Civil War historians. He worked as a newspaperman in Boston, Cleveland, and Washington, and also held a position at the U.S. Department of Commerce in 1948. Catton’s best-selling book, A Stillness at Appomattox, earned him a Pulitzer Prize and National Book Award in 1954. Before his death in 1978, Catton wrote a total of ten books detailing the Civil War.
Loading...
or support indie stores by buying on