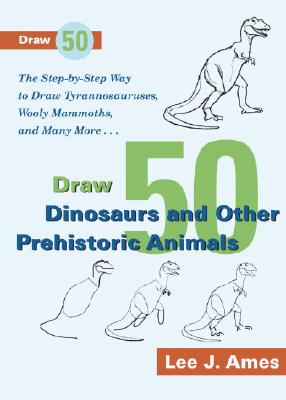 The Step-by-Step Way to Draw Tyrannosauruses, Wooly Mammoths, and Many More...

The tyrannosaurus rex, brachiosaurus, triceratops  and moa burst out in terrifying splendor to the  delight of all dinosaur fans. With a foreword by  George Zappler, Director of the Staten Island  Zoological Society.

An American Bookseller Pick of the  Lists.

Lee Judah Ames (January 8, 1921 - June 3, 2011 ) was an American artist noted for his Draw 50... learn-to-draw books. He was born in Manhattan, New York. His first job at age eighteen was at Walt Disney Studios. He has since led a career as an advertising artist, fine artist, cartoonist, designer, animation in-betweener, illustrator, and as an artist-in residence at Doubleday. His series of 26 Draw 50... books take a friendly and minimalist approach to teaching drawing while the books often contain no instructional text. He enlisted in the military and served as a second lieutenant during World War II. He and his wife Jocelyn resided in Mission Viejo, California.
or
Not Currently Available for Direct Purchase
Copyright © 2020 American Booksellers Association