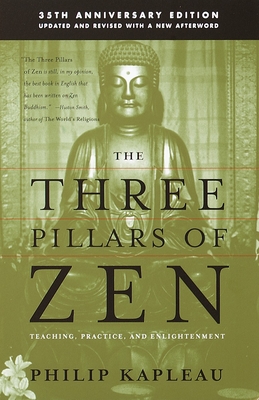 The Three Pillars of Zen

In this classic work of spiritual guidance, the founder of the Rochester Zen Center presents a comprehensive overview of Zen Buddhism. Exploring the three pillars of Zen—teaching, practice, and enlightenment—Roshi Philip Kapleau, the man who founded one of the oldest and most influential Zen centers in the United States, presents a personal account of his own experiences as a student and teacher, and in so doing gives readers invaluable advice on how to develop their own practices. Revised and updated, this 35th anniversary edition features new illustrations and photographs, as well as a new afterword by Sensei Bodhin Kjolhede, who succeeded Kapleau as spiritual director of the Rochester Zen Center. A moving, eye-opening work, The Three Pillars of Zen is the definitive introduction to the history and discipline of Zen.

Praise For The Three Pillars of Zen: Teaching, Practice, and Enlightenment…

"The Three Pillars of Zen is still, in my opinion, the best book in English that has been written on Zen Buddhism." —Huston Smith, author of The Worlds' Religions and Forgotten Truth

"The Three Pillars of Zen heralded the end of armchair Buddhism.  With this practical guide to Zen meditation, Roshi Kapleau ushered in the first wave of American zazen practitioners. It was extraordinarily inspiring. It still is." —Helen Tworkov, founding editor of Tricycle: The Buddhist Review and author of Zen in America

"For over thirty years Roshi Kapleau's Three Pillars of Zen has been the wellspring of Zen teachings for practitioners in the West, remaining as vital and fresh today as it was when it was originally published. It truly ranks among the timeless classics of Zen Buddhism." —Roshi John Daido Loori, Abbot, Zen Mountain Monastery

"For anyone seriously interested in Zen—this book will be invaluable." —The Times Literary Supplement (London)

Roshi Philip Kapleau was the founder of the Rochester Zen Center and the author of numerous books, including Zen: Merging of East and West and The Three Pillars of Zen: Teaching, Practice, and Enlightenment. Kapleau studied and taught Zen for more than 50 years, completing over sixteen years of study and practice in both Japan and America. He died in 2004.
Loading...
or support indie stores by buying on