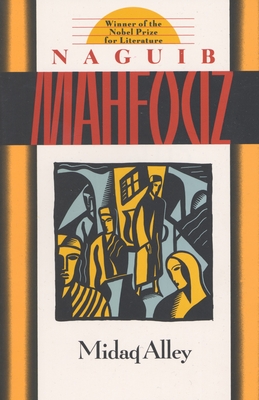 Widely acclaimed as Naguib Mahfouz's best novel, Midaq Alley brings to life one of the hustling, teeming back alleys of Cairo in the 1940s. From Zaita the cripple-maker to Kirsha the hedonistic cafe owner, from Abbas the barber who mistakes greed for love to Hamida who sells her soul to escape the alley, from waiters and widows to politicians, pimps, and poets, the inhabitants of Midaq Alley vividly evoke Egypt's largest city as it teeters on the brink of change. Never has Nobel Prize-winner Mahfouz's talent for rich and luxurious storytelling been more evident than here, in his portrait of one small street as a microcosm of the world on the threshold of modernity.

Naguib Mahfouz was born in Cairo in 1911 and began writing when he was seventeen. His nearly forty novels and hundreds of short stories range from re-imaginings of ancient myths to subtle commentaries on contemporary Egyptian politics and culture. Of his many works, most famous is The Cairo Trilogy, consisting of Palace Walk (1956), Palace of Desire (1957), and Sugar Street (1957), which focuses on a Cairo family through three generations, from 1917 until 1952. In 1988, he was the first writer in Arabic to be awarded the Nobel Prize in Literature. He died in August 2006.

"The greatest writer in one of the most widely understood languages in the world, a storyteller of the first order in any idiom." —Vanity Fair

"A Dickens of the Cairo cafes." —Newsweek

"The incredible variety of Naguib Mahfouz's writings continue to dazzle our eyes." —The Washington Post

"Mahfouz's work is freshly nuanced and hauntingly lyrical. The Nobel Prize acknowledges the universal significance of his fiction." —Los Angeles Times Book Review
or support indie stores by buying on
(This book is on backorder)
Copyright © 2020 American Booksellers Association