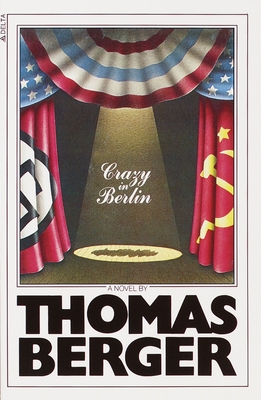 Crazy in Berlin is the first volume in the saga of Carlo Reinhart. As an army medic stationed in Allied-occupied Germany, Reinhart is a young man of large bulk (two hundred pounds, plus)—good-hearted, intelligent, and something of a fool. He pursues with anxiety and bewilderment his custodial role over a shattered and noxious civilization, accompanied by an assortment of influences: Nathan Schild, an American Communist acting as a U.S. intelligence office; the war waif Trudchen, an accommodating Heidi; Schatzi, a charter-member Nazi, now a Russian courier and black market virtuoso. Crazy in Berlin is a lusty tale, full of irony and wit, of a stumbling American Odysseus.

Praise for Crazy In Berlin

“Thomas Berger is a name to remember. . . . A novelist with a great career before him.”—Harvey Swados, The New Leader

“One of the best war novels, and one of our best novels no matter what kind.”—W.G. Rogers, Associated Press

Thomas Berger (1924–2014), whom the Times Literary Supplement called “one of the century’s most important writers,” was the author of twenty-three novels. Little Big Man has been published in more than fifty editions throughout the world.
Loading...
or support indie stores by buying on