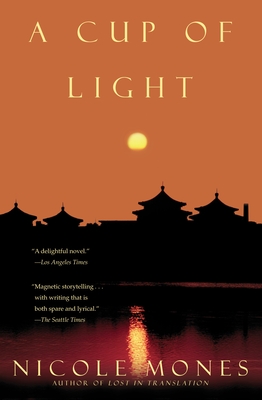 A Cup of Light

As an American appraiser of fine Chinese porcelain, Lia Frank holds fragile beauty in her hands, examines priceless treasure with a magnifying lens. But when Lia looks in the mirror, she sees the flaws in herself, a woman wary of love, cut off from the world around her. Still, when she is sent to Beijing to authenticate a collection of rare pieces, Lia will find herself changing in surprising ways…coming alive in the shadow of an astounding mystery.

As Lia evaluates each fragile pot, she must answer questions that will reverberate through dozens of lives: Where did these works of art come from? Are they truly authentic? Or are they impossibly beautiful forgeries--part of the perilous underworld of Chinese art? As Lia examines her treasure, a breathtaking mystery unravels around her. And with political intrigue intruding on her world of provenance and beauty, Lia is drawn into another, more personal drama--a love affair that could alter the course of her life.

Praise For A Cup of Light: A Novel…

"An unconventional and intriguing art world mystery...generates real suspense–moving cinematically from character to character and place to place–all the while deftly sketching the intricacies of Chinese porcelain and the world of imitators and smugglers that surround it."
-Publishers Weekly

“A page-turner that leads us into a closed, sometimes clandestine world… Mones’ talent for intrigue runneth over.”
--The Dallas Morning News

“Magnetic storytelling…with writing that is both spare and lyrical.”
--The Seattle Times

Nicole Mones was awarded the Janet Heidinger Kafka Prize for her first novel, Lost in Translation, which was also named a New York Times Notable Book. She lives with her family in Portland, Oregon.
Loading...
or
Not Currently Available for Direct Purchase