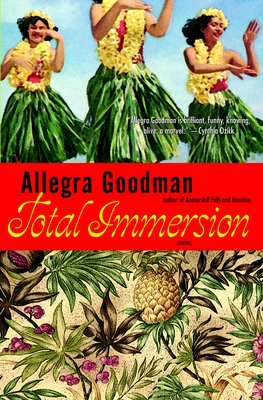 In "The Succession," the members of a prosperous Hawaii synagogue agree on almost nothing. But when the president of the synagogue absconds with a small fortune, far deeper—and more troubling—rifts emerge...In "The Closet," Evelyn's sister flees her family to take up residence in the attic—while the shunned Evelyn finds herself slipping into the waters of her sister's soul....In "Wish List," an expert on terrorism, vacationing at an academic retreat in England,receives a late-night phone call from National Public Radio. Asked for commentary on a hostage situation of which he is ignorant, Ed can whisper only: "It's unspeakable."

In these and other exquisite stories, Allegra Goodman fills rooms with laughter and voices, captures dinner parties, seaside picnics, academic grudges, shul politics, and the kind of hurts that only families and lovers can know. Featuring two new stories previously published in The New Yorker, Total Immersion is Allegra Goodman's first collection of short fiction—a masterful work from one of the most powerful and eloquent voices on the American literary landscape.

"Goodman is brilliant at capturing the clutter of both interior and exterior life."—Los Angeles Times

"Allegra Goodman is a remarkably gifted young writer, with a penchant for getting swiftly to the truth of things."—Chaim Potok

Allegra Goodman’s novels include The Chalk Artist, Intuition, The Cookbook Collector, Paradise Park, and Kaaterskill Falls (a National Book Award finalist). Her fiction has appeared in The New Yorker, Commentary, and Ploughshares and has been anthologized in The O. Henry Awards and Best American Short Stories. She has written two collections of short stories, The Family Markowitz and Total Immersion and a novel for younger readers, The Other Side of the Island. Her essays and reviews have appeared in The New York Times Book Review, The Wall Street Journal, The New Republic, The Boston Globe, The Jewish Review of Books, and The American Scholar. Raised in Honolulu, Goodman studied English and philosophy at Harvard and received a PhD in English literature from Stanford. She is the recipient of a Whiting Writer’s Award, the Salon Award for Fiction, and a fellowship from the Radcliffe Institute for Advanced study. She lives with her family in Cambridge, Massachusetts, where she is writing a new novel.
Loading...
or
Not Currently Available for Direct Purchase