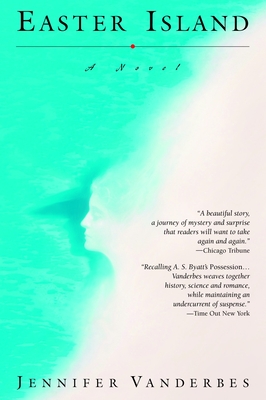 In this extraordinary fiction debut—rich with love and betrayal, history and intellectual passion—two remarkable narratives converge on Easter Island, one of the most remote places in the world.

It is 1913. Elsa Pendleton travels from England to Easter Island with her husband, an anthropologist sent by the Royal Geographical Society to study the colossal moai statues, and her younger sister. What begins as familial duty for Elsa becomes a grand adventure; on Easter Island she discovers her true calling. But, out of contact with the outside world, she is unaware that World War I has been declared and that a German naval squadron, fleeing the British across the South Pacific, is heading toward the island she now considers home.

Sixty years later, Dr. Greer Farraday, an American botanist, travels to Easter Island to research the island’s ancient pollen, but more important, to put back the pieces of her life after the death of her husband.

A series of brilliant revelations brings to life the parallel quests of these two intrepid young women as they delve into the centuries-old mysteries of Easter Island. Slowly unearthing the island’s haunting past, they are forced to confront turbulent discoveries about themselves and the people they love, changing their lives forever.

Easter Island is a tour de force of storytelling that will establish Jennifer Vanderbes as one of the most gifted writers of her generation.

Praise For Easter Island: A Novel…

“One of the best novels of the year." —Robert Stone, author of Dog Soldiers

"Splendid...captures in the intertwined stories of two women a passion for life and for science that transcends time." —Andrea Barrett, author of Servants of the Map

"Recalling A.S. Byatt's Possession...weaves together history, science and romance, while maintaining an undercurrent of suspense." —Time Out (New York)

"Captivating...one of those impressive debut novels that come along once a year...and demands that readers take notice of its existence." —St. Louis Post Dispatch

"Intelligently conceived and elegantly written, Easter Island is a pleasure to read...combines gripping traditional storytelling with scientist-explorer protagonists...makes the quest for scientific breakthroughs both exciting and all too human." —Newsday

Jennifer Vanderbes is a graduate of Yale University and the Iowa Writers’ Workshop. She was a McCreight Fellow in Fiction at the University of Wisconsin, and most recently was the Fellow in Creative Writing at Colgate University.
Loading...
or
Not Currently Available for Direct Purchase