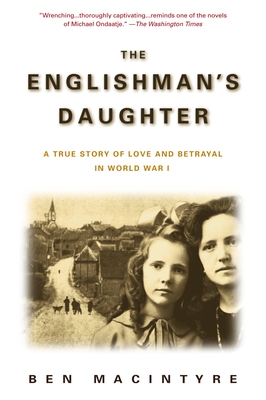 A True Story of Love and Betrayal in World War I

In the first terrifying days of World War I, four British soldiers found themselves trapped behind enemy lines on the western front. They were forced to hide in the tiny French village of Villeret, whose inhabitants made the courageous decision to shelter the fugitives until they could pass as Picard peasants.

The Englishman’s Daughter is the never-before-told story of these extraordinary men, their protectors, and of the haunting love affair between Private Robert Digby and Claire Dessenne, the most beautiful woman in Villeret. Their passion would result in the birth of a child known as “The Englishman’s Daughter,” and in an act of unspeakable betrayal, a tragic legacy that would haunt the village for generations to come.

Through the testimonies of the villagers and the last letters of the soldiers, acclaimed journalist Ben Macintyre has pieced together a harrowing account of how life was lived behind enemy lines during the Great War, and offers a compelling solution to a gripping mystery that reverberates to this day.

Praise For The Englishman's Daughter: A True Story of Love and Betrayal in World War I…

“This poignant reconstruction...has all the tensions of a contemporary mystery.”
--The Philadelphia Inquirer

”Wrenching...thoroughly captivating...reminds one of the novels of Michael Ondaatje.”
--The Washington Times

Ben Macintyre is writer-at-large and associate editor of the Times of London. He is the author of Agent Zigzag, The Man Who Would Be King, The Englishman’s Daughter, The Napoleon of Crime, and Forgotten Fatherland. He lives in London with his wife, the novelist Kate Muir, and their three children.
or support indie stores by buying on