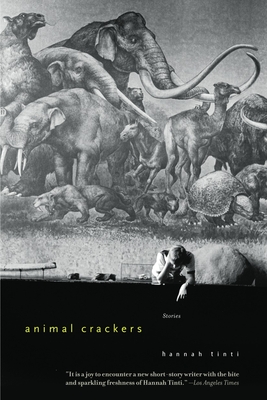 With bravura storytelling, daring imagination, and fierce narrative control, this dazzling debut introduces that rare writer who finds humanity in our most unconventional behavior, and the humor beneath our darkest impulses.

In these ten strange, funny, and unnerving stories, animals become the litmus test of our deepest fears and longings. In the title story, an elephant keeper courts danger from his gentle charge; in “Miss Waldron’s Red Colobus,” a headstrong young woman in Africa is lured by the freedom of the monkeys in the trees; in “Talk Turkey,” a boy has secret conversations with the turkeys on his friend’s family’s farm; in “Slim’s Last Ride,” a child plays chilling games with his pet rabbit; in “Gallus Gallus,” a pompous husband projects his anger at his wife onto her prized rooster.

This fresh, inventive debut will introduce Hannah Tinti as one of the most gifted writers of her generation. Enter her world at your own risk, and you will come away bewitched.

"Animals play the starring roles in Tinti’s striking debut collection. In 11 highly original, sometimes gorgeous stories, they are freighted with the symbolic significance of all that is peculiar, cruel and loving in their human counterparts.... At its best, Tinti’s suburban gothic recalls Joy Williams."
--Publishers Weekly, Starred Review

"Hannah Tinti is who you want around a campfire or on a long road trip. The stories in ANIMAL CRACKERS willmake your head spin, your skin crawl, your heart jump."
-Helen Ellis, author of Eating the Cheshire Cat

"A whimsical cross between the Dr. Doolittle books and The Life of Pi. Original and funny, but also tough, touching, shocking, and enthralling."
--Stephen Dixon, author of Frog, Interstate, and I

Hannah Tinti grew up in Salem, Massachusetts. Her work has appeared in Best American Mystery Stories, Story Quarterly, and Epoch, among other publications. She is currently the editor of One Story magazine.
Loading...
or
Not Currently Available for Direct Purchase