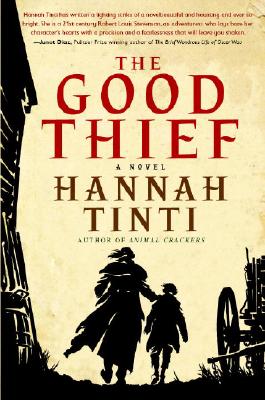 Praise For The Good Thief…

"Every once in a while — if you are very lucky — you come upon a novel so marvelous and enchanting and rare that you wish everyone in the world would read it, as well. The Good Thief is just such a book — a beautifully composed work of literary magic."—Elizabeth Gilbert, author of Eat, Pray, Love


"Hannah Tinti has written a lightning strike of a novel—beautiful and haunting and ever so bright. She is a 21st century Robert Louis Stevenson, an adventuress who lays bare her character's hearts with a precision and a fearlessness that will leave you shaken." —Junot Díaz, winner of the Pulitzer Prize and the National Book Critic’s Circle Award for The Brief Wondrous Life of Oscar Wao


"The Good Thief's characters are weird and wonderful.... [It] has all the makings of a classic—a hero, a villain and a rollicking good tale set in 19th century New England about a good boy who gets mixed up with a lot of bad men.... All of that, along with its humor, ingenuity and fast pace, make The Good Thief compelling."—San Francisco Chronicle

“Ren lives every child's fantasy, to leave a mundane life for an adventure in which he discovers who he was supposed to be and who he could yet become…. [His] mischievous ways earned the character comparisons to Huck Finn and Oliver Twist. And the plot, which winds its way through a mousetrap factory and the memory of a family tragedy, certainly give him a literary playground in which to frolic.”—Associated Press

“The Good Thief is wry, wise, deeply felt and ingeniously plotted, a wonderful, riveting spin on the tale of abandoned boys gone bad, or good, or both. Move over Huck Finn and Oliver Twist, make room for Ren, The Good Thief's one handed but quick fingered and witted orphan, thief, hero — I loved him, and his book.” — Brock Clarke, author of An Arsonist's Guide to Writers' Homes in New England


"The Good Thief is a book that deserves comparison to the work of classic authors like Robert Louis Stevenson and Charles Dickens—not only because it's a remarkable piece of work, but also because it reminded me of what it used to be like, when I was a kid, to be truly engrossed in a book. You lift your head and hours have passed, and you realize that you've been utterly drawn into a world that is as vivid and real as your own. A masterful achievement."—Dan Chaon, author of National Book Award finalist Among the Missing, and You Remind Me of Me

“The Good Thief is a magical book. Everything worth writing about is in it: love, death and—more than anything else—family.  I wish I'd written it.”—Daniel Wallace author of Mr. Sebastian and the Negro Magician

"Hannah Tinti writes with uncommon grace and stunning insight. Her quirky tribe of outcasts will break into your dreams and steal your spirit. Surrender to them! Let your heart be broken! Only then will you know the tender thrill of their wild companionship. The Good Thief is pure delight. When you wake from this dream, you will wake bedazzled".—Melanie Rae Thon, author of Iona Moon and Sweet Hearts

“The key to Tinti's success with this novel is the constant tension between tenderness and peril, a tension that she ratchets up until the final pages…. [With] enough harrowing scrapes and turns to satisfy your inner Dickens.”—Washington Post Book World

“A debut novel so rich that you'll hope it becomes the first in a series…. Part coming-of-age tale and part pure adventure, The Good Thief evokes Charles Dickens with its blend of humor, social commentary and poignancy.”—Cleveland Plain Dealer

“Tightly plotted, unmannered, irresistible. Tinti writes in a lean, pitch-perfect prose that grabs the reader's mind and won't let go. The incidents she relates are dark and grim, but the telling leaves room for humanity and humor.”—Orlando Sentinel

“The kind of story that might have kept you reading all day when you were home sick from school…. Writing for adults while keeping to a child’s perspective isn’t easy, and Tinti makes it look effortless.”—New York Times Book Review

“Tinti secures her place as one of the sharpest, slyest young American novelists."—Entertainment Weekly (A-)

“[A] striking debut novel…Unfolds like a Robert Louis Stevenson tale retold amid the hardscrabble squalor of Colonial New England.  The sheer strangeness of the story is beguiling…Good fun.”—The New Yorker

“A very good book indeed…Reminds you why you fell in love with reading in the first place…Tinti’s imaginative powers…reacquaint us with our own.  And that’s a gift to be cherished…”—Boston Globe

“[A] dark but nimble variation on that favorite 19th-century literary trope, the woeful orphan story…. Ren becomes the surprising moral center of a colorful band of misfits and grave robbers. His sentimental education about what it means to be a ‘good’ boy makes for a Dickens of a tale.”—USAToday.com

"In her highly original debut novel, [Tinti] renders the horrors and wonders she concocts utterly believable and rich in implication as she creates a darkly comedic and bewitching, sinister yet life-affirming tale about the eternal battle between good and evil." —Booklist, starred review

“Ren, with his love for religion and penchant for thievery, is immediately likeable…. A novel full of scams, shams and underhanded deals and populated by hustlers, thieves and grave robbers.”—Publishers Weekly