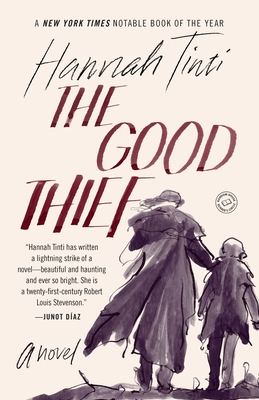 Praise for The Good Thief

Praise For The Good Thief: A Novel…

"Hannah Tinti has written a lightning strike of a novel—beautiful and haunting and ever so bright. She is a 21st century Robert Louis Stevenson, an adventuress who lays bare her character's hearts with a precision and a fearlessness that will leave you shaken."—Junot Díaz

"The Good Thief's characters are weird and wonderful. . . . [It] has all the makings of a classic—a hero, a villain and a rollicking good tale set in 19th century New England about a good boy who gets mixed up with a lot of bad men. . . . All of that, along with its humor, ingenuity and fast pace, make The Good Thief compelling."—San Francisco Chronicle

“Ren lives every child's fantasy, to leave a mundane life for an adventure in which he discovers who he was supposed to be and who he could yet become. . . . [His] mischievous ways earned the character comparisons to Huck Finn and Oliver Twist. And the plot, which winds its way through a mousetrap factory and the memory of a family tragedy, certainly give him a literary playground in which to frolic.”—Associated Press

“The key to Tinti's success with this novel is the constant tension between tenderness and peril, a tension that she ratchets up until the final pages. . . . [With] enough harrowing scrapes and turns to satisfy your inner Dickens.”—Washington Post Book World

“Difficult to put down . . . A cavalcade of chase scenes, suspenseful moments and revelations.”—Seattle Times

“The kind of story that might have kept you reading all day when you were home sick from school. . . . Writing for adults while keeping to a child’s perspective isn’t easy, and Tinti makes it look effortless.”—The New York Times Book Review

“Tinti secures her place as one of the sharpest, slyest young American novelists."—Entertainment Weekly

“[A] striking debut novel . . . Unfolds like a Robert Louis Stevenson tale retold amid the hardscrabble squalor of Colonial New England.  The sheer strangeness of the story is beguiling. . . . Good fun.”—The New Yorker

Hannah Tinti's work has appeared in magazines and anthologies, including The Best American Mystery Stories 2003. Her short-story collection, Animal Crackers, has been sold in fifteen countries, and was a runner-up for the PEN/Hemingway Award. She is the editor of One Story magazine.
Loading...
or
Not Currently Available for Direct Purchase