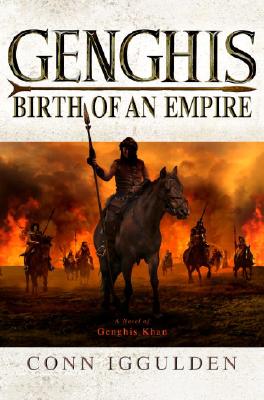 Birth of an Empire

From the author of the bestselling "The Dangerous Book for Boys"
He was born Temujin, the son of a khan, raised in a clan of hunters migrating across the rugged steppe. Temujin's young life was shaped by a series of brutal acts: the betrayal of his father by a neighboring tribe and the abandonment of his entire family, cruelly left to die on the harsh plain. But Temujin endured and from that moment on, he was driven by a singular fury: to survive in the face of death, to kill before being killed, and to conquer enemies who could come without warning from beyond the horizon.
Through a series of courageous raids against the Tartars, Temujin's legend grew. And so did the challenges he faced from the machinations of a Chinese ambassador to the brutal abduction of his young wife, Borte. Blessed with ferocious courage, it was the young warrior's ability to learn, to imagine, and to judge the hearts of others that propelled him to greater and greater power. Until Temujin was chasing a vision: to unite many tribes into one, to make the earth tremble under the hoofbeats of a thousand warhorses, to subject unknown nations and even empires to his will.


Praise For Genghis: Birth of an Empire…

"Iggulden writes with sweep and immediacy...the novel races along as swiftly and inexorably as its main character."—Christian Science Monitor

“Brilliantly imagined and addictive.... This is historical fiction of the first order.”—Publishers Weekly, starred review

Conn Iggulden is the author of Genghis: Birth of an Empire," " the first novel in the series, as well as the Emperor" "novels, which chronicle the life of Julius Caesar: Emperor: The Gates of Rome, Emperor: The Death of Kings, Emperor: The Field of Swords, and Emperor: The Gods of War," " all of which are available in paperback from Dell. He is also the co-author of the bestselling nonfiction work "The Dangerous Book for Boys." He lives with his wife and three children in Hertfordshire, England.
Loading...
or
Not Currently Available for Direct Purchase