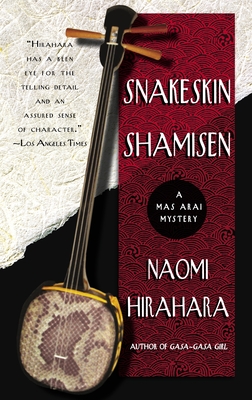 From Summer of the Big Bachi to Gasa-Gasa Girl, Naomi Hirahara’s acclaimed novels have featured one of mystery fiction’s most unique heroes: Mas Arai, a curmudgeonly L.A. gardener, Hiroshima survivor, and inveterate gambler.

Few things get Mas more excited than gambling, so when he hears about a $500,000 win–from a novelty slot machine!–he’s torn between admiration and derision. But the stakes are quickly raised when the winner, a friend of Mas’s pal G. I. Hasuike, is found stabbed to death just days later. The last thing Mas wants to do is stick his nose in someone else’s business, but at G.I.’s prodding he reluctantly agrees to follow the trail of a battered snakeskin shamisen (a traditional Okinawan musical instrument) left at the scene of the crime…and suddenly finds himself caught up in a dark mystery that reaches from the islands of Okinawa to the streets of L.A.–a world of heartbreaking memories, deception, and murder.

"Highly enjoyable.... Hirahara's sharp ear for dialogue and keen sense of place mark this as a superior read, but it's her intimate view of the Japanese-American community and her wry portrait of the endearing Mas, with his fondness for gambling and Spam, that really make this series stand out."—Publishers Weekly

Naomi Hirahara is a freelance writer and journalist who served for several years as an editor of The Rafu Shimpo, the largest Japanese American daily newspaper. She is the author of two previous Mas Arai mysteries, Gasa-Gasa Girl and Summer of the Big Bachi, named one of "The Ten Best Mysteries and Thrillers of 2004" by the Chicago Tribune and a Publishers Weekly "Best Books of 2004" pick.
Loading...
or support indie stores by buying on
(This book is on backorder)