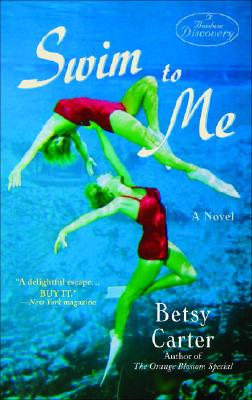 Sometimes to be who you really are, you have
to pretend you’re already who you want to be.

At two, Delores’s mother dropped her into the shallow end of a lake, trusting instinct would teach her daughter to swim. From then on, the water is where Delores Walker feels most at home. Now, nearly seventeen, she’s boarding a Greyhound bus leaving the Bronx for sunny Weeki Wachee Springs, a tacky roadside attraction in the shadow of Walt Disney’s new Florida phenomenon.

With a hundred silver dollars left behind by her runaway dad, Delores is chasing her dream of being a mermaid with a group of other aquatic hopefuls—girls just as awkward and uncertain out of water as they are beautiful and graceful in it. And in this make-believe world of sequined tails and amphibious fantasy, Delores will learn some very real lessons about growing up and surviving in a world where everyone sometimes feels like a fish out of water.

A heartfelt novel of coming-of-age no matter what age you are, populated with characters offbeat, outcast, and thoroughly lovable, Swim to Me is filled with the kind of wise magic that’ll have you believing in the impossible before the final page.


Praise For Swim to Me: A Novel…

“A warm novel…It’s easy to lose yourself in Carter’s cozy, generous story, in which second chances abound and change is almost always for the better.” —Washington Post

Betsy Carter is the author of The Orange Blossom Special and her memoir, Nothing to Fall Back On, which was a national bestseller. She is a contributing editor for O, The Oprah Magazine and writes for Good Housekeeping and New York magazine, among others. Carter formerly served as an editor at Esquire, Newsweek, and Harper’s Bazaar, and was the founding editor of New York Woman. She lives in New York City.

What did the novel’s opening scene mean to Delores? How did the reality of her grown-up world compare to the memory of that trip?

How did the novel’s two distinct settings—New York versus Florida—reflect two distinct parts of Delores’s identity? What did she discover about finding a true home, and her true self?

What were your first impressions of the Walkers’ marriage? What was at the heart of their quarrels? Despite the hardships it caused, did Roy’s departure strengthen his family?

What makes the early 1970s an ideal time period for this storyline? How did the details in Swim to Me match your memories or impressions of this era? How did the novel’s “soundtrack” of song references affect your reading?

How did Gail’s early life influence her approach to adulthood and mothering? What did Avalon teach her about being a confident woman?

Is Thelma a good surrogate mother to the girls she supervises? Is her personal legacy a story of shame or triumph, or both?

Discuss the varied personalities of the girls of Weeki Wachee. Who are the most powerful members of Thelma’s circle? What do all of them, including Delores, have in common?

How does Delores respond to attention from men? Is her role in the weather segment on television very different from the roles she performs at Weeki Wachee? What is the difference between a woman whose sex appeal is exploited and a woman whose beauty is admired?

What does Roy discover about himself after he is reunited with Delores? How are they transformed by their jobs in Florida?

Delores was worried that Thelma and the others would discover that she had lied about aspects of her family. What did Delores’s image of her family, both the fantasy and the reality, say about her hopes and fears? In what ways have you reinvented yourself in your lifetime?

Swim to Me is populated by many characters who are pursuing their dreams, ranging from Delores’s and Gail’s career pursuits to Dave Hanratty’s vision of an Aqua Zoo. What is the boldest goal you have ever envisioned? How far did you pursue it?

How does the novel’s title echo the dilemmas of trust and learning faced by the characters? What makes the world of water—by turns alluring, tranquil, and perilous—a good metaphor for the process of becoming an adult?

What does the future hold for Delores and Westie? What do you predict for their family?

How do this novel’s themes of survival and determination, enhanced by a whimsical spirit, also shape Betsy Carter’s debut novel, The Orange Blossom Special?