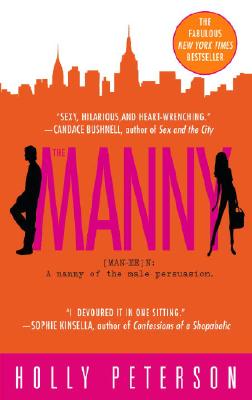 What's a Park Avenue working mom to do when her troubled son desperately needs a male role model and her husband is a power workaholic? If she's like the gutsy heroine of Holly Peterson's astute new comedy of manners among the ill-mannered elite, she does what every other woman on the block does. She hires herself a "manny." A solid middle-class girl from Middle America, Jamie Whitfield isn't "one of them" but she lives in "the Grid," the wealthiest acre of real estate in Manhattan, where big money and big media collide. And she has most everything they have-a big new apartment, full-time help with her three children, as well as her very own detached Master of the Universe attorney husband. What she doesn't have, however, is a full-time father figure for their struggling nine-year-old son, Dylan. But the rich haven't yet encountered a problem they can't hire someone else to solve. Enter the manny. At first the idea of paying a man to provide a role model for Dylan sounds too crazy to be true. But one look at Peter Bailey is enough to convince Jamie that the idea may not be quite so insane after all. Peter is calm, cool, competent, and so charmingly down-to-earth, he's irresistible. And with the political sex scandal of the decade propelling her career as a news producer into overdrive, and her increasingly erratic husband locked in his study with suspicious files, Jamie is in serious need of some grounding. Peter reminds her of everything she once was, still misses, and underneath all the high-society glitz, still is. But will the new manny in her life put the ground back beneath her feet, or sweep her off them? From the Hardcover edition.

Praise For The Manny…


“Money, Manners, Mannys: Holly Peterson's debut is a fabulously sharp skewering of the silly-rich in New York. Observing a Park Avenue Working Mom falling for The Help had me both touched and tormented with laughter. I couldn't put it down. We should ALL get a Manny right now."–Plum Sykes, author of Bergdorf Blondes

Holly Peterson spent a decade as an Emmy award-winning producer at ABC news. Her work has been published in the New York Times, Harper's Bazaar, Talk, and Newsweek, where she is now a contributing editor. She lives in New York City with her family and is working on her next novel. From the Hardcover edition.
Loading...
or
Not Currently Available for Direct Purchase